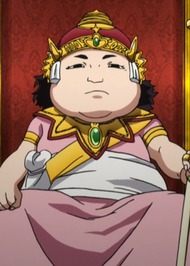 This anime has some really atrocious character designs, this hambeast being one of them.

He was scum at the beginning, but at least he became a better person later.

He is despicable the way he abused his power, made so many others suffer, and likely caused the deaths and extreme suffering of, but unlike the wizard or the wicked mother of the Kou family, he at least makes an attempt at redemption and accepts what amounts to his punishment.  It does not mean I really like him just hate him less than the other supercreeps.

After watching the Kingdom of Magic, I feel kind of bad for hating this guy...

Well he does change into a better person. but I still don't like him *^*