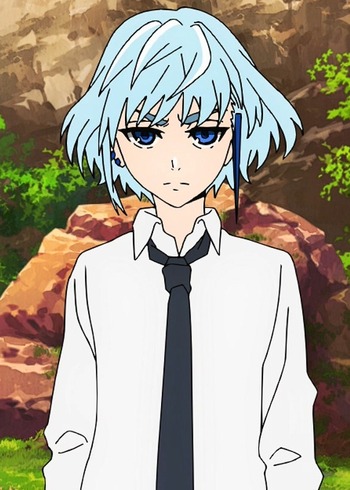 I didn't finish the anime so my opinion may change but I really want to share it.

I'll be honest, at first I was really scared about this character. I was scared that he'll be that emotionless smart and mysterious character that acts like that because of their past trauma. I was scared that he'll be a character that nothing affects him at all, no matter what you say, no matter what you'll do, he'll just keep his poker face, no emotions. And luckily, he wasn't exactly like that. Yes, he does have a little of this personality trait but I was really happy to see that he wasn't bland and boring, he wasn't there just to smart for Bam. They took his potential to the right direction. Personally I'm not a fan of these characters, mostly because it's hard to make them interesting and not bland and emotionless, well they managed to make him standable and even likable so not my favorite but I definitely like him and satisfied with him character.

hes like a mix of Karma and Nagisa lol.

He is the literal reason i enjoy tog. Every time a new chapter or ep comes out I'm basically waiting for khun to get the spotlight

He is one of my favorite characters in this anime.