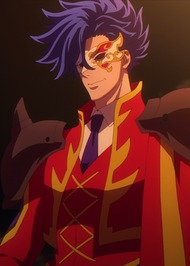 Dude has serious problems and fkd up from childhood.. That explains his weirdo behaviours..there is chance of redemption? idk,whatever im really in between love & hate with this character which is exhausting

It makes me sick that people actually like him, the way that he treats people is not ok. And how dare he hit Cherry.

Best character in the show tbh

i don't think he's that much like hisoka. he's flamboyant and has a spanish theme song but ADAM has a whole backstory and a redemption arc. also idk why all the comments say he's a pedo?  his skating move is named love hug but thats just a name... in reality he's bareling straight on into an opponent to ruin them. his whole thing is that he learned "love=pain' when he was younger meaning when he says love he just means he's going to bring pain. his interest in langa relates to his skating ability not the fact he's a kid. unlike hisoka who just straight up stares at 12 year old's butts adam is just competing, and his style towards everyone holds the love=pain theme. ok rant over. in summary i liked the character i think the show would've been much more boring without him.