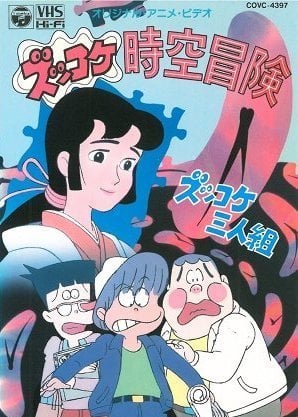 Hayakawa Yui is totally unmotivated, lazy girl who loves sleeping and eating. She's 16 but looks like a boy from elementary school; her one and only talent is to run really fast. After accidentally switching on the time machine which her younger brother made she travels to the Sengoku period, where luckily joins to retreating foot soldiers using the name Yuinosuke. Then she eats some amanitas and meets the man of her dream.

I was just a regular office worker on my way home from work, when I had the misfortune to be involved in a traffic accident. Next thing I know, somehow I'm in Edo-period Tokyo, in the red light district?! Is this for real?! Did I somehow slip through time?

Kasane is your average kendo-obsessed girl, when a brush with a mysterious sword sends her back in time to the Sengoku Era. Stuck in an unfamiliar time and place, Kasane also has the poor luck of winding up right in the middle of the turmoil that surrounded Oda Nobunaga's rise to power!

One fateful day, a girl time slipped into the Sengoku Era. It was an abrupt enough event to be dubbed god’s whim, done to sate hellish boredom. The girl has no power to change the world. She was a very ordinary, common, and plain girl that can be found anywhere. And that girl can do no more than a single thing. Survive the Sengoku Era ——– that’s all.

The turtles are transported back in time to ancient Japan.

Suddenly finding himself in the Sengoku era, regular high school student Sagara Yoshiharu is about to be killed in the battlefield. He is saved by none other than the man who later becomes the infamous Toyotomi Hideyoshi but at a cost to his life. With history completely changed because of Yoshiharu’s actions, he tries to make things right again but it seems that history is taking a different course than the one he learned in school. Oda Nobunaga is now a brilliant but young girl named Oda Nobuna. Yoshiharu starts working under her command to bring back history to its correct course and find his way back home to the present world.