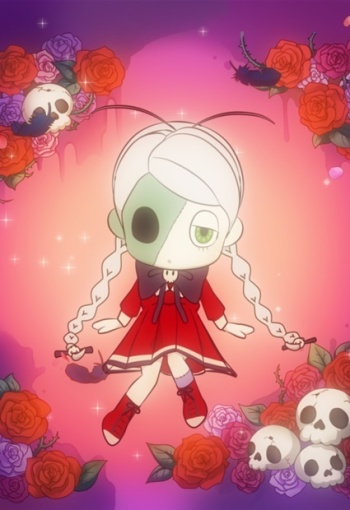 I do not know what to say. Okay, what do you expect with an anime that only lasts about 6 minutes and has only one episode? Maybe it's my fault and I expected too much.

Story? Zonmi-chan wants to make a meatpie and her sister will help her. And her boyfriend wants to visit her. That's basically the story

The characters are ... okay, what do you expect with an anime that only lasts about 6 minutes and has only one episode? They look different and behave differently. However, one can not say that one learns much more about you than the name, appearance and family affiliation.

The discription say:"A heartwarming splatter comedy about a zombie in love! Zonmi-chan is a clumsy, careless, but cute girl. Sometimes she takes a bite out of the guy she likes. Oh, that's right, Zonmi-chan is a zombie girl." And i say:" No. You don´t see Zonmi-chan, the zombie, in love. You don´t see she bite in a boy, and not her personality. The only what you see is, she bake a meatpie. From the comedy and splatter is not to see"

Maybe it could have become a good anime if it had more episodes, a story, and more effort. Maybe similar to Aggretsuko's structure. But as it is now, it is more of a disappointment and a waste of time.