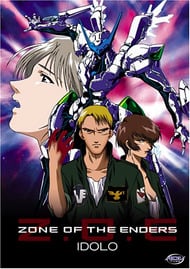 The year is 2167 and mankind has populated Mars. Somewhere on the Red Planet in a hidden lab the Martians are developing a new weapon known as "Idolo", which incorporates the mysterious mineral Metatron -- a combination that causes Idolo to become frighteningly powerful and gain a mind of its own. Lieutenant Radium Lavans is assigned as its test pilot, but the Metatron's power slowly consumes him and he begins to walk the path of destruction and madness. Will he be able to break free from its stronghold, or will it end in a bloodbath that consumes both the Earth and Mars?

StoryThis is a well done 50 minute OAV which builds on the famous mecha action game "Zone of the Enders". This show takes place five years prior to the events in the first Z.O.E game and works as a prequel which explains how the battle mechs called "Orbital Frames" came to be. Compared to other "Game -> Anime" conversions this one works very well, as the story itself isn't taken directly from a game. This is still an OAV which you can watch and enjoy without knowing anything about the ZOE games. This is another take on the "mecha" theme but it is really a lot more than that. It's a political anime which reminded me a bit of Gasaraki although that show was to political IMO. Idolo features a well detailed action script in the form of military drills, demonstration, fights between groups, and the anatomy and design of the frame (which is well done). The story incorporates a lot of different things even if we're only talking about roughly 50 minutes. We've got action, good character interaction, romance and drama. It's a lot more than your normal political sci-fi fighting anime. AnimationIt's a well animated show. While not top of the line a'la Gonzo it definitely has its own style. I like the character designs which are well made and very mature and look realistic, as are backgrounds, mechas and especially the battles which are well animated with many different camera angles being used. The Orbital Frame Idolo has a rather interesting design concept going on. The cockpit is located at the crotch of the frame and stands out a bit. I guess the designer made a play on the word "cockpit". SoundGood music which sort of blended in. I didn't notice the music much, but it was there and made the scenes more dynamic. The VAs did a good job both during the fierce, tough moments as well as during the emotional dramatic ones. CharactersHere we have a surprisingly good character development going on, considering that the show is as short as it is. Many characters grow and some become very likeable and it's not hard to feel a bit of empathy for the characters during the more dramatic moments. They evolve in a trustworthy way and act like some humans would. OverallThis is a great mecha OAV which does a good job in the various genre departments. We've got good action, good drama, good dramatic moments, good character interactions and so on. The show does not focus very much on the battles themselves, but on the characters, their lives and the situation around them. There are also other things which are introduced which lead to the actions taken in the first Z.O.E game. There are politics playing in the background, and the relations between some factions of Mars and Earth are slowly but surely detoriating, and such a word as trust starts to mean less for every day which passes. For rewatchability, absolutely! I've seen it twice already. Interesting characters, good animation, etc, make this a great watch. And seeing as it's as short as it is, the time to watch it is not an issue.

Zone of the Enders: Idolo Story 7/10 Sci-fi has long been a realm that we use to reflect on the state of the real world, with the potential to hold a mirror to political, religious, or social situations and explore the realm of 'what if'. ZotE: Idolo is a portrayal of a future society that has become segregated between the main human population left on Earth, and the growing colonial presence on a Mars that we've reshaped for our own habitation. By the time the story opens, we can see that tensions have already risen to the brink of war, and Earth maintains a military presence on its colony to head off the potential recurrence of a revolution. What follows is the consequence of a secret bitter struggle for independence and a trek through the motivations of those at its front lines. Spite, hatred, jealousy, and vengeance have always been prime motivators for human progress, and in Idolo they result in military technological advances that are compared to the 20th century discovery of atomic energy. We follow Radium, the pilot of the titular Idolo: the first of a new generation of mech with a mysterious and poorly understood power source that apparently has the potential to tear through fleets of the forces that have come before. This awesome power is not to be taken lightly, and we see the day-to-day interaction with this device gradually take their toll on his psyche and relationships, before it all comes to a head. Without spoiling, I will mention that the story takes an interesting bent on the old adage of responsibility and spirals through some unexpected twists to a satisfying, effective ending. It is a story that is self-contained, but also prepares the setting for the television (or video game) sequel. Sound 6/10 For the vast majority of the film the music falls heavily on the generic side. Whenever I focused on that instead of the onscreen action I felt myself suppressing the urge to yawn. As an accompaniment to the tense action scenes it's effective, but still leaves a lot to be desired. There's also a quieter track that plays right towards the end that almost managed to give me goosebumps and made me wonder why they didn't just have that composer just score the whole thing. Sound effects are not outstanding, but they do their job. Gunfire feels appropriately weighty, which is good because there's a lot of it to go around. One oddment is that when energy weapons are used there seems to be some sort of intentional absence of sound (this may be a setting quirk, and if so effectively distinguishes ZotE from most sci fi shows). There is, unfortunately, sound in space, but there's worse things to complain about. Voice acting is very good. Particularly from the lead. He delivers a wide range of emotion, up to and including sheer insanity, and manages to make it believable and not hammy in the least. Animation 8/10 On the whole, stylish and effective. Interesting and expressive faces. Ah, shall we say... 'unique' mecha designs. The action flows logically except at a couple of points, and looks smooth most of the time. The desolation of Mars is really accentuated with the way backgrounds are drawn in bleak fashion, despite the obvious evidence of terraforming and colonization. The evidently hazardous exteriors contrast well with the sleek and cold military interiors. This world is not a place you want to live in if you have the choice, and it comes across well in the art. Characters 7/10 Radium is a well-wrought 'knight in sour armour' and the story plies him mercilessly, leading us through a short but potent character arc for the 50 minute running time. The supporting cast doesn't occupy much space in the story and are mostly forgettable. The relationship with his wife Dolores is understated, probably too subtle to elicit much empathy from most viewers. She never really gets developed past a shoulder for Radium to cry on, which is somewhat disappointing. We do, however see traces of our lead's philosohy rub off on his protege Viola, who is subsequently groomed as a pilot of the next generation. Overall 7/10 Despite suffering in pacing by trying to fit too many individual moments into the small space here created, the overall product is enjoyable, being successfully boueyed by fast paced action and an overall sense of awe at both the set pieces and the Idolo mech itself. 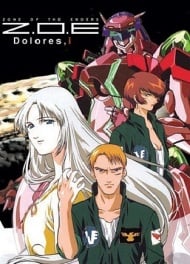