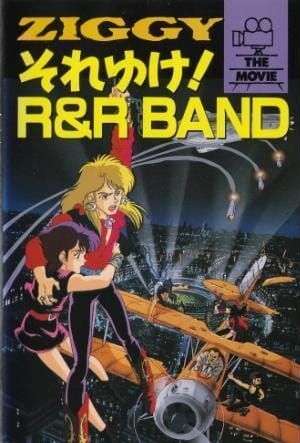 Ziggy: Soreyuke! R&R Band follows Japanese rock Ziggy as they come to London for a recording session, only to find themselves getting attacked by a group of men as the arrive at the hotel. The musicians barely escape with their lives, but soon find out that their producer has been murdered, and they are the suspects. Chased by the police and a mysterious organization who has murdered their producer, they soon find shelter at a local rockers' place.

And that mysterious organization? The Nazis. That's right, the Nazis are back and want to take over over the world, but this time they want to take over the world through popular music. I know that this is technically a spoiler, but would you even be paying attention if not for the twist being that hilariously contrived? And to top it all off, the anime has members of Ziggy working with a cop from Scotland Yard who pilots an old World War II plane to attack a Nazi zeppelin to save another member of the band and to try and stop the Nazis.

Now, to pull it back a bit so that I don't oversell this OVA, you have to approach this with moderate expectations. As awesome as that premise is for something, it's still not as memorably crazy or over-the-top as some other anime is, like Angel Cop or Mad Bull 34, but I'd argue that in some ways that's better. Sometimes being that over the top is tiring, so seeing something like this being a lot more low key can be a bit more enjoyable to some extent.

But considering that the anime's plot is just an excuse to get the whole OVA going and the music being front and center of the whole thing, it's pretty obvious that this was meant to to push the soundtrack that was being heavily featured throughout the whole thing, with the songs being features prominently in the credits.

And that's because this was a promotional piece for the real world Japanese rock band Ziggy. But for those who aren't in the know, who exactly are Ziggy?

Ziggy was and still kinda is (more on that later) a blues rock/hard rock band that was founded in Morishige Juichi in 1984. Throughout the years, the bands line-up has been constantly changing, with multiple members joining, leaving, and rejoining the band.

In the year 2000, they changed their name to "SNAKE HIP SHAKES" and released a few albums under than name, but they eventually changed it back to "ZIGGY" in 2003. In 2008, the band announced an indefinite hiatus and have only come back for short periods of time in 2010 and 2014, with 2014 being Ziggy's 30th anniversary.

The TL;DR read version of it is that this 70 minute OVA was nothing but a promotional piece to put on store shelves to promote the band that it was designed around.

And this wasn't the only anime to feature the music of Ziggy, with the long-running anime Detective Conan/Case Closed featuring other songs by Ziggy, including "Happy End" and "Step by Step".

Ziggy is an anime that not only could have been made in the 80s, with it's cheesy "Take down the man with the power of heart and music" plot and silly soundtrack, but it could have only been made during the Japanese bubble economy where Japan was having an exponential economic growth, which, coincidentally, would pop the year after the released of this anime.

And while it's nothing more than a way to sell people on the band, it still enjoyed it. Don't get me wrong, it's not some hidden classic, but it is a mildly amusing romp with a silly plot solely meant to get people to buy more CDs, but it was fun seeing some random 80s band take down the Nazis.