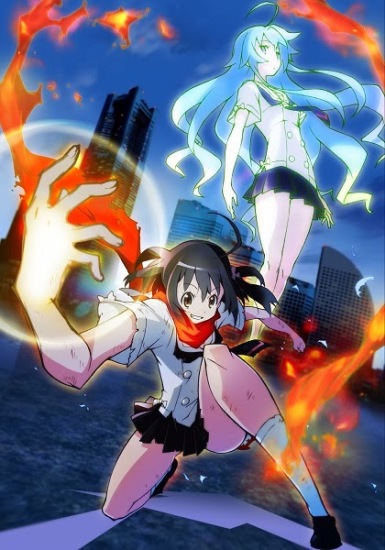 The story of this show starts simple: A girl named amane and her (speaking) teddy bear Lilian want to make the world not scared for people with ESP. These people with ESP have special powers and are all different.

The story continues and eventually a battle with an enemy ESP follows, but apart from these battles it doesn't really feel like the story progresses much, the battles continue but how people got their ESP powers is never really explained

Fluid, with beautiful animation. Some ESP have the power to move water at will and this just looks amazing, the other powers are animated well. The backgrounds and characters are too and so are the battles. A really nicely animated show.

The sound isn't that noticable, but the sound effects used whilst battle is nice and done well, the Voice Actors have done a good job giving life to the characters, their emotions are displayed well.

A bit of a let-down at this part, wich is mostly because of the fact that yes characters are introduced, but they never have any back story(some have a small story) nor is it explained how the characters got their powers, perhaps this is to blame to the fact that it just has two episodes but the characters weren't that good in this show

I really enjoyed this show, mostly because of the battles that were done well, looked and sounded great. Apart from that the show amused me, but I wouldn't say it was spectacular.

If you would be looking for any other ESP show i'd reccomend Zettai karen Childeren: THe Unlimited - Hyoubu Kyousuke wich apart from it's long name is a great show entertainment wise, and has some good story as well

-Warning this review may contain spoilers-

Another review done by the one and only,this time for this lovely little series Zetsumetsu Kigu Shoujo: Amazing Twins. Yeah it probably would have done better with a 12 episode series but it didn’t and we were left with this 2 episode series. It follows a girl Amane and her ‘twin’ Lilianne who have this ability known as ISH.

It was all just so squashed, this series attempted to try and fit so much information into such a small space of time. The story was so quick half the time you didn’t really know what was going on hence why I said that this would have done better as a longer series, with more of a gap between everything happening instead of just rushing. There was also quite limited character development due to how fast the series was going.

The animation changed style as it went on, starting with the cute sakurasou style but then when Amane and Lillianne ‘Become one’ it goes into a no game no life style which I found quite interesting, the animation overall was well done.

I can’t lie but none of the voice actors really stood out to me, they did fit the character but no voices made me research the VA’s, so they were pretty bland honestly. The music didn’t intrigue me either, again pretty average.

Quite generic characters overall, there wasn’t really one that stood out honestly. The mains were alright, quite cute and they fitted the style of the story but even then they weren’t amazing. Also the story was lacking character development, we got a bit for a couple of  characters but so many questions were left unanswered.

PS: This is for the Daily Anime Marathon Club March 2016