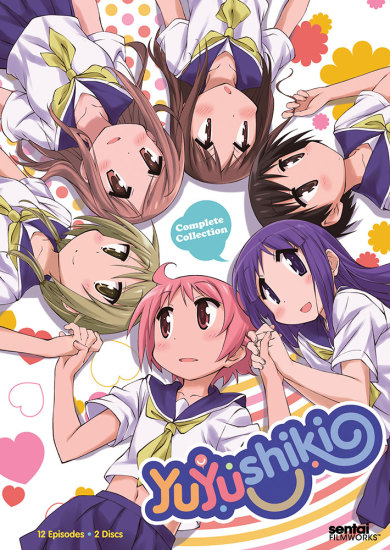 Now, anyone that knows me personally knows that, depsite how much I try to resent it, I absoultely adore animes that follow a bunch of girls going about their days in highschool. It's not exactly the most manly thing in the world, but we're not hear to discuss my (negligible) masculinity, we're hear to review Yuyushiki.

Now, straight off the bat I'll say this...this show follows the tried and tested forumula of every highschool "moe" anime. You've got the girls, you've got the highschool, you've got the random conversations, you've got the club activities, you've got the teacher that everyone loves, you've got the beach episode...it's all here and while Yuyushiki doesn't provide anything groundbreaking, is that necessary a bad thing? I'm pretty sure I'm not the only one that, when about to watch a new highschool anime, to not expect the new Melancholy of Haruhi Suzumiya, not every anime must be new and innovative...they just need to be enjoyable and that's exactly what Yuyushiki is....enjoyable!

The (non-exsitant) story follows three highschool girls; Yui ICHII, Yukari HINATA and Yuzuko NONOHARA as they go about their everday lives. In episode one they become the only members of the Data Processing Club and spend some time most episodes looking up random facts, which is actually quite educational at times. Most of the other "stories" (or acts) of each episode are either them sitting in class, or over Yui's house. Sure, because of this nothing amazing is brought to the table, but over time it becomes familair and safe...like a normal home or classroom.

The characters are also nothing special, but they are still a joy to watch. Yukari is your typical airhead ditz who usually has no clue what's going on. Yuzuko is the typical prankster who focuses all their attention on getting the "straight man" Yui, to react...of course, these pranks usually end up with Yui hitting Yuzuko...as you would expect. What makes this trio really weird/creepy, is that it is hinted all throughout the show that Yukari and Yuzko have feelings for Yui...which makes sort of sense, when all the main charactes have "Yu" at the beginning of their names, it's not suprising that there are hints at yuri. Still it is not too distracting or off putting, as it is usually played for comedic effect.

The side characters are not too noteworthy; you have Chiho AIKAWA who starts off very shy, but quickly warms up to the group, Kei OKANO who tries to keep Chiho away from the "Yu" group, due to their weirdness. Then there's Fumi HASEGAWA the stotic girl who comes out with some of the best lines...she doesn't get nearly enough screen time. Finally, there's Yoriko MATSUMOTO, also known as "Mom", the friendly teacher who acts as everyone's role model.

In conclusion, Yuyushiki isn't going to win any awards and most likely will never receive a second season, but it's an enjoyable anime all the same. If you're looking for some quick laughs and a happy-go-lucky time, look no further!

Pointless discussions ... that was a comment made by one of the main characters somewhere around episodes eight or nine.  In fact, the sane character, one of the very few in that all-girl academy where yuri is ripening joke by joke, or better non sequitur after non sequitur.

Yuyushiki (2013) is the confused adventures of Yui, Yuzuko, and Yukari.  Note that these names begin with the same kanji symbol.  Hence the name Yuyushiki (hey, three girls, why not Yuyuyushiki?).  Their personalities are uniquely different.  Think of a comedy team.  Yui is the straight man girl.  The comic genius comes from the other two, usually stuff bordering on the bizarre.  Yuzuko is almost simplistic in her jibes.  But Yuzuko is brilliant, and she refuses to wear the glasses that mark her as a zealous reader.  Yukari is from a wealthy family and is often away on family business.  But Yukari is not concerned about her status, and she might even be a tad embarrassed by it.  Yukari has a pleasant laugh which reveals a shyness with her.  All the other weird noises, that's probably Yuzuko.  Between Yuzuko and Yukari's inane comments while searching for the deep truths in their quests in the behalf of the Data Processing Club (and the slow burn effect this has on Yui) and all the other aspects of school life (and summer activities at the beach, ice cream parlors, and Yui’s air conditioned room), cute comments of those important years in a girl's growth get lampooned big time.  Figuring out the humor is the challenge.

The girls’ banter borders on insipid.  The only redeeming factor was use of the triad, an old rhetoric principle that is done for emphasis and effect (Caesar said 'Veni, vidi, vici ... wow!).  But you could never believe how the triad is used by the Data Processing Club.  Yui says something.  Yuzuko repeats it.  Yukari repeats it again.  Yui gets annoyed.  HUMOR (maybe)!   And the summations the three girls leave behind in their club explorations of 'sun,' 'water,' 'time' which they scrawl  on the whiteboard must have confused their advisor Yoriko 'Mom-san' Matsumoto.

Yes, interacting with the other classmates only extends the dicey humor, especially if maturation has blessed the adolescent girl.  Groping Yui is a given, cuteness wins out, even if it gets annoying.  But prime target for yuri is Aikawa, whose attention is sought by Yuzuko and tomboyish Okano.  But Aikawa tends to be interested in Yui, being a fan of practicality, no doubt.  When cuteness clashes ... look out.

The animation technique seemed to follow a minimalist approach to the girls.  The appearance seems to make no improvements on the 4-panel manga.  This explains the disjointed plot lines.  The music, mind you, does have a busy pulse of three lively, if not zany, high school girls making a case that life need not be taken with a great deal of seriousness.

Being by me this won't be short, will jump around a bit for the sake of giving a fitting example where needed and you probably won't agree.

It seems around here that nobody who comments will agree or vice-versa but here I review again anyway. It's yet another one of those anime where the premise and the plot are the same. There's a club, they do stuff. Just like Lucky Star, Genshiken and Boku Wa Tomodachi Ga Sukunai, and they are entire FRANCHISES. Unlike in Genshiken or BWTGS however in Yuyushiki they can't manage to do the same thing all episode, they switch from one random and pointless conversation to another with Yui's friends all the while acting like this show should be put down as shojo-ai and calling one of the teachers Mom for some reason. One example is their discussion of what water is. (It's a liquid just like milk, it takes the form of its container having none of its own plus it can be drank, I learned that in school but they didn't?)

Before I wasn't keen on watching Lucky Star because it seemed too similar to Azumanga Daioh, it's so hyped and the opening theme and dance in it is gut-wrenchingly annoying* but now I've got even more ammunition. Now I've seen a show that's like it and is painful so I'm hardly going to watch the thing itself. This is basically what this show is; it's Lucky Star without the targeting (in an advertising sense) of otaku, the main reason why Lucky Star got popular (it seems everybody now likes to think they're nerds but do a really poor job of it). Perhaps my reasons are faulty you may argue but I saw that coming. Similarity shouldn't put someone off entirely but it can help; I like Great Teacher Onizuka (apart from the movie and not being a manga fan I find the manga only OK) and I like the Gokusen dramas (the anime is only fair). Not being an existentialist (in my experience everything happens for a reason but so much seems to go wrong eventually that I can only conclude that we're only here to be tested, yes I know you disagree and have some unfunny remark that is either sarcastic or smug to make, this is the internet, huge fortress of nihilism, pretension, Le Vey satanism and argumentum ad absurdum after all) I'm not going to like the Ghost In The Shell movie if I don't like Ghost In The Shell Stand Alone Complex The 2nd Gig (God help me, I was bored one night so I watched 2 episodes on the short lived anime channel Anime Central and it was one of the worst anime I've ever seen). As for the hype well, The Beatles are good enough but not the best band ever, the Large Hadron Collider ultimately didn't do anything in spite of all of the hype, all the Queen visiting Ireland did was cost the state broadcaster 100 jobs (I hate the media for being biased anyway so good enough for them), the theory of evolution is constantly banged on about even though germ theory is why people in the west are much healthier now plus it hasn't been revised so much (the idea that all life began female was scrapped and the timing was also revised though humans being what they are they just can't focus on anything that isn't divisive) and I knew from Obama's inauguration speech that he wouldn't be much different to Bush (war abroad, Republicans calling the shots, American exceptionalism, check, check, check. Can you see now why I'm automatically suspicious of hype? Yes I know I've spent most of the review saying why I won't watch Lucky Star but I'll point it out again; this anime pretty much is Lucky Star. 2 for 1 sale right here guys, I don't have to watch Lucky Star itself because I've seen Yuyushiki and it was a bit crap.

* It's one of those things you stumble across even when you sure as hell aren't looking for it, like yaoi if you do a Google image search of Haruka Minami without specifying that it's minami-ke. Yep, now you can't even look for pictures of a girl without coming across yaoi. Can you understand now why I don't think much (to say the very least) of that fanbase?