Yuuki Yuuna is a Hero - Videos 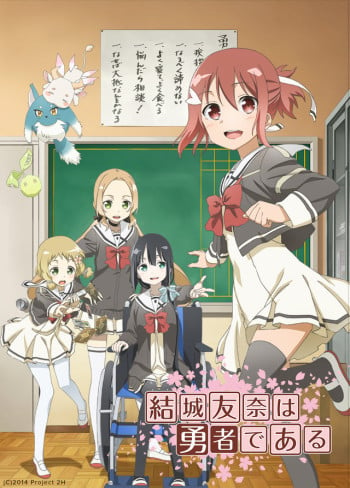 By order of the Taisha, Yuna and the rest of the Hero Club head to the beach.

Anime-Planet users recommend these anime for fans of Yuuki Yuuna is a Hero. All available to watch right here, right now!

Both anime follow a group of schoolgirls and their club activities while facing a deadly threat. Also, there is despair and suffering :d

Both shows involve schoolgirls who are very good friends suffering from hardships and are going through some psycological shit (excuse my french).

Both shows that mix happy-go-lucky adorable high school girls enjoying their school club time and friendships, with horrible things happening to them and the world that they have to deal with. While the shows are different the feel that that gives them is similar. Both shows are fantastic and if you loved one I'd definitely reccomend checking out the other.

From the animation style to the cell phones used to transform, Magical Girl Raising Project reminds me quite a bit of the anime Yuuki Yuuna Is a Hero.

Both of these magical girl anime are fairly moe in animation, with adorable girl with giant eyes and shining hair and round, smiling faces. Except that the adorable-ness belies that both anime take the magical girl genre and put it on it's head. Whether it pitting the girls against each other or making power usage dangerous, both anime definitely put the girls in danger just by making them magical girls. If you like one, check out the other.