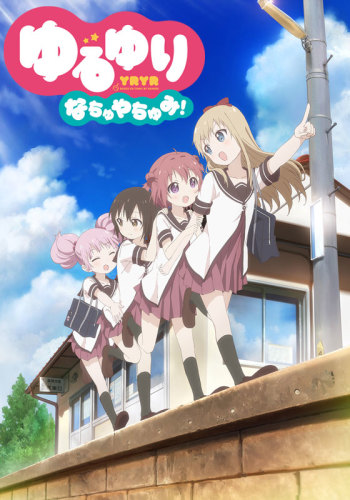 The main difference in both shows is that Yuru Yuri consists of an all-female cast and does not involve romance of a serious kind. Mikakunin de Shinkoukei does have a romance plotline running through it, but it is very mild and while it might appear so by the description to be the main plot of the show, it feels like the role of the romance is placed more on the sidelines.

An all-female (main character) moeblob in both cases without much of a plot but definite shoujo-ai implications.

The main difference in both shows is the somewhat more timid nature of the comedy in Morita-san wa Mukuchi whereas Yuru Yuri is more extroverted and in your face.

The main similarity between these two series is the cast of characters. The number of characters which have paralells in this series is massive and the interactions are of the similar type of school life short gag type. All main and most supporting characters are female and there are some very slight shoujo-ai influences in both series.

Main difference is that the pacing in Yuru Yuri is somehow slightly higher than Aiura despite the difference in episode length (you'd expect Aiura to be high octane due to the episode lenght, but it's slower).