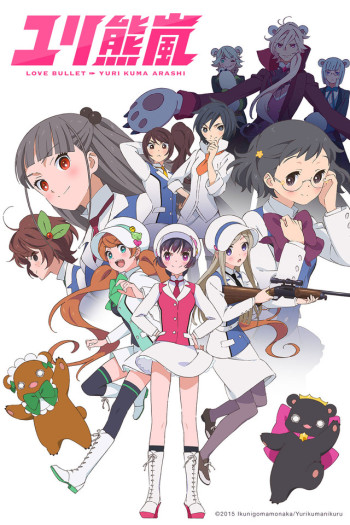 Yurikuma Arashi is an anime you really have to give a chance to envelop you, give it the full chance to let yourself enjoy it. It starts off fairly strange, characters you don't know, a plot line you get dumped into, very little explanation, and harldy any answers. Before you know it the answers are slowly unfurling before your eyes and you're sucked into the story, even if simply to find out what the heck is going on.

Story: The story depicts love, friendship, inclusion, exclusion, and bias. It incorporates a lot of strong ideals in such a whimsical facade. Two old friends who are drawn to each other once more for the sake of finding true love; during the hardships of being excluded because of differences from the "herd" mentality. (I don't want to say too much for fear of ruining this for someone who has yet to watch)

Animation: I wasn't entirely a fan of the animation style used in this anime. It's unique and effective for this type of show. It balances the weight of both the plot and the whimsical nature they tried to achieve.

Sound: I found the music in this anime to be very pleasant. I rarely notice the music in whatever I watch, I found myself listening to the intro over and over instead of skipping ahead as I normally would.

Characters: The characters are well developed and grow as the story progresses. They show real pain, passion, confusion, and anger.

Overall: I'd reccomend this anime to friends of mine, I'd tell them to give it a shot. The story was well thought out, abeit confusing at times. The animation was pleasant enough. The sound was wonderful. The characters will make you love them and find yourself joining in their emotions.

I found that this anime confused me to pieces and before I even realized it I had started to understand what was going on. As someone who hasn't always fit it, and who has been the "evil" to exclude I found it to be quite relatable. Give this show a chance and really keep your mind open to the plot that is sure to elude many under it's whimsical disguise.

It's been a while since Penguindrum (which I rather liked, though I don't understand the appeal of Revolutionary Girl Utena) and Ikuhara Kunihiko is finally back, this time with Yurikuma Arashi. One way to translate that title might be the completely nonsensical "lesbian bear storm." And such a title is nonsense because you have a hard time imagining someone making an anime (or anything, for that matter) about a raging tempest of bears and lesbians. However, that title actually isn't nonsense and pretty much describes the plot of the show- it's about a school full of girls (most of which are lesbians) + bears in a storm of bizarre events.

Just to be clear, I don't have any sort of problem with the cast being lesbians... but surely even the most open-minded person would ask "hey: wtf?" Well, the creator (Ikuhara) has gone on record saying (paraphrasing) that he thinks typical boy-girl relationships overwhelm the rest of the plot. I might even buy that argument, except for a) Penguindrum did just fine and b) the rest of the plot that was left over by scrapping pretty much any male characters at all (except for one child) is pretty damn weak. The lesbian relationships don't have any interesting dynamics to them, they're just used as a vehicle to deliver up some stupendously raunchy girl-on-girl fanservice.

I'm really not a fan of fanservice, but I generally don't care; it is what it is. However, Yurikuma tries to present itself as deep and full of complex metaphor. To really hammer in on the "metaphor" it takes two approches. The first is the kind of obvious metaphor that screams "HEY LOOK AT ME AND MY METAPHORICAL STUFF"... imagery like blooming flowers for sexuality and honey for innocent affection, things that make a 6th grade literature teacher salivate. That's one layer in the show, but the other tack taken in Yurikuma is the one that Ikuhara is really known for: weird, batshit crazy and vague. Yurikuma features a mountain of utterly bizarre imagery that seems to absolutely beg for interpretation. The problem is, I never got the sense that any of it was with any other purpose than to shovel in more things that are left open to interpretation. Open ended and interpretive plots can certainly work very well (look at Mushishi), but the best of those use vague imagery to lead the reader/viewer to deeper appreciation. It's a difficult style of storytelling and is a slippery slope, if you don't get it right then your story comes across as trying too hard to be "deep" and instead is just pretentious.

It is a slippery slope that Yurikuma does a running leap into a backflip with a cartwheel to the sound of the 1812 Overture and cannon blasts right off of. The central plot is naught but the faintest, weakest thread, floating on top of an ocean of insanity. Many (most) elements of the plot are unbelievably vague, to the point that I'm not going to waste space with a synopsis. All this is wrapped up in so much random junk that is supposed to make it appear deep but, as I already said, it fails.

So, does Yurikuma do anything right? Well, it's pretty. The animation has a pretty distinctive style and I really like the way colors and backgrounds are used. Also, the music and sound are fairly nice. The writing is also somewhat clever in places and there's lots of memorable/catchy dialogue (my favorite: "Shabadadoooo").

These are also some of the same things I liked about Mawaru Penguindrum, but it's just missing the plot, and characters and... well a lot. Penguindrum was also plenty vague and strange, but I felt like it was much more cohesive and well-conceived. As it stands, it's been a while since that show aired and I think you'd be much better off just watching that again instead of watching Yurikuma Arashi. This show was a big disappointment.

this show is a mess, and is extremely confusing. the main protagonist is fucking stupid, she lost the love of her life? it's so disorienting. i wish the story was easier to understand because this show had so much potential. the opening song is so good, and the animatio and sound are quite nice, but it just gets absolutely ruined when you throw in all these characters and plot holes.

Uuuhhh.... Okay what i got from this anime is that there are two worlds. Bears and Humans. the bears are called "Ursas" and the humans are called "Homos" And they really dont get along at all. However the humans are just down right horrible. This anime is filled with women and there are literally only 3 men. the "Homo cert council" or something like that. And theres a full blown war and a promised kiss and shabadadoo and yeah. This anime makes absolutely no sense if you stop paying attention. EVEN ONCE. i genuinely mean that, its on you if you don't wanna believe me. intro sound track is an amazing 10/10 Jeez, its so freaking good. Loved it so much. It was the only thing that made me rewatch and devote attention to the anime. Weirdest thing....i may... rewatch it again. idk its addicting like that. its that sort of anime. Still, very intensely weird though. Idek what i should rate it tbh.

If you are looking for an anime that is a far cry from anything you have ever seen before, this just might be the one for you.  Hidden somewhere deep within a world where cute girls are struggling to survive a deadly invasion of adorable bears, there is a heartwarming story of friendship and a strong message to never give up on love.

Story - The main story going on is a girl named Ginko fell in love with a girl named Kureha. Ginko wished to become a girl so they could experience true love together. A celestial court that exists between the realm of bears and humans approved her transformation, but it came at a cost. Kureha lost her memories of Ginko and she had to try to gain her friendship once again.

While I generally like the premice of all this, I feel like the execution could have been much better. The main issue I had was that this anime had so many flashbacks that it was often hard to tell if what you are watching is past or present. On top of that, a lot of critical information about the past is kept hidden until you get close to the end.  While all of the set ups did eventually build up to a few good Ah Ha moments and a somewhat comprehensive story overall, the middle episodes constantly had me wondering what the various characters motivations were and sometimes what was even going on.

Animation - For a story about a deadly invasion, there certainly could have been a few well choreographed battle scenes, but for the most part the animation was much more simplistic. Its worth mentioning though that quite often in the background of whatever was going on was beautiful scenery drawn with both style and attention to detail.

Sound - When it comes to sound, what immediately stands out in this anime was the voice acting. For the most part the human characters all did a good job speaking their lines. The bear characters constantly saying "Growl Growl" at the end of each sentence started out as being cringe worthy, but eventually it started to grow on me and I thought it was cute. Also when it comes to sound, this OP is probably one of my favorite OP songs. I really haven't heard anything quite like it in anime before. It kind of gave me Trans Siberian Orchestra vibes.  The ED song was pretty catchy as well, and the dancing bear made me want to watch it almost every time.

Characters - I thought Kureha's character did a great job trying to balance her sociatial expectations of her, namely to hate bears while also making an effort to follow her heart's true feelings. Similarly, Ginko's character tried to find a balance betwen her feral desire, namely eating humans, and following her heart's desire for love with Kureha. Lulu was everything I could have reasonably hoped for as Ginko's faithful sidekick. Other then the three main characters, not a lot of character development happened at least as far as I could tell. I'm actually okay with that though, the story was confusing enough without a heavy focus on its minor characters.

Overall - This anime felt like it had the potential to be something great, if the story was drastically rearranged in order to flow better and everything else was polished around the edges, this could have easily been an 8 and maybe even a 9.  As it is now though, its a 7/10 for me and I can understand why a lot of people rated it lower. Especially people who didn't make it all the way to the end.