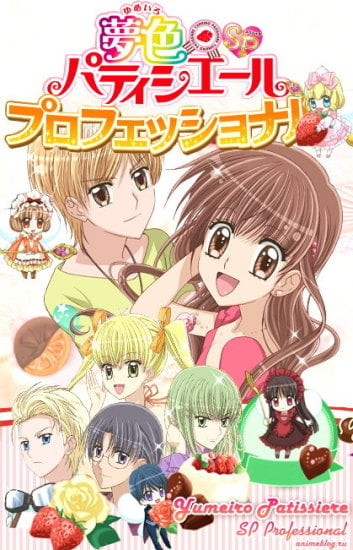 All they had to do... was continue the story. Tie up some loose character threads here, add new conflicts there... For reasons that I still can't quite understand, this did not happen in YPP.

Story: Fellow reviewers of Yumeiro Patissiere, this is why I ragged on you back in season 1. In terms of filler, season 1 can't even touch YP Professional. The first few episodes introduce a new conflict and new characters, and then the series promptly stumbles all over itself trying to get the plot moving. When the characters have made the tiniest bit of progress, the series comes to a grinding halt to spend several episodes in the fairy world. I finally had to call it quits after episode 7. HALFWAY into the series of 13 episodes, and so far nothing has happened? Screw you, YPP, screw you.

Animation: The overall animation seems to have improved veeery slightly, but bafflingly enough, the animation of the food and desserts (which was it's only shining point in season 1) seems to have regressed. Averages out to me.

Sound: I never rate sound as it's not very important to me, and very subjective. I will say that since Ichigo's character has aged, I never had to listen to her get very shrill like I did in season 1.

Characters: Hey! I have a great idea! Let's replace two of our only pseudo-fleshed out characters in the cast with a really boring cute girl and a really annoying foreign guy. Because, y'know... reasons. Lemon is the most forgetable character ever spawned, and was MUCH more interesting in season 1. I actually found Johnny to be an interesting and amusing addition to the show at first, but the gratuitous English is very gratuitous, and the love triangle only puts Ichigo in a negative light. She never denies his advances, no matter how overt they are, despite her having established feelings for Kashino already. She and Kashino are mostly consistant with their previous counterparts, from what I saw, and remain as cliche as ever.

Overall: A crappy followup to an only somewhat-crappy series. My advice is to steer clear, unless you really need to see the conclusion to the romance, in which case, just skip to the last episode. All the buildup you need is in season 1, and the plot is so meandering, you can probably fill in the blanks on your own anyway.

I love this anime I wish there was a third season. The first season is about cakes, compititions and stuff that type which was really intresting. But the second was full of romance!! Well the first one had a bit romantic moments but second was full of them but its really good I recomend it it does not just have romance but if you are into shoujo or magic anime then this is a must watch

I'm in love with the drama and action of this anime. It focuses on real-life problems that so many people can relate too, so it also can be of use for real-life problems! For example, it helps to teach important life lessons that will also inspire you to do more and make the best of things. This Anime lets you experience so many things too, and I love its ability to stir your emotions! The comedy and romance portions will make you laugh and cry, while also embarrassing you with its characters actions. On my part, I was rather depressed when the series ended, but the loss you feel after going through so much with these characters is more than worth it!