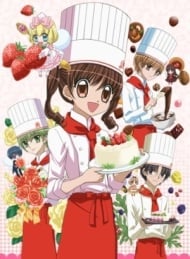 StoryYumeiro Patissiere embraces every shoujo cliché in the book- A clumsy yet hardworking girl with a quaint dream arrives at an ornate boarding school in the middle of a forest. She encounters prodigies, "princely" boys whose every blink and smile are accompanied by sparkles and roses, jealous Queen Bees, and fairies. It's a near carbon-copy of every shoujo series out there, which is fine if you're accustomed to tripe. To its credit, the series eschews the trap of becoming a simple fluffy wish-fulfillment shoujo. Instead of granting her magical baking powers, thus dooming the show to atrocity instead of merely mediocrity, the sweets spirits give Ichigo extra tutoring sessions. Despite this, Ichigo still masters techniques a bit too quickly. I would prefer a show where the protagonist just mans up and accomplishes her goal on her own, but the light dusting of magical realism isn't too onerous, all considered. The rest of the plot is less palatable. The Cake Grand Prix, an Iron Chef-esque baking showdown, occupies almost the entirety of the series' run. Episode after episode that could have been spent on character development, comedy, or a variety of drama is instead relegated to Ichigo and team having yet another baking showdown against even more "impossible" odds. A few contests would be admissible, even welcomed, but to devote such a majority of time to them seems merely a way to disguise filler as something relevant. Even the lackluster plot would be slightly admissible were it accompanied by a shred of believability. Fans of the genre may have no trouble ignoring all the happy coincidences that Ichigo runs abreast of, but the rest of us will have to buff up our suspension of disbelief to accept some of them. When the main characters' specialties are fruits, chocolate, cake, and Asian fusion, of course the upcoming competition just happens to center around those ingredients. And despite the school's claims of being a meritocracy, where students are grouped as determined by their relative baking skill, the teacher arbitrarily places Ichigo in the highest-level group without attempting to assess her skill level. Needless to say, the three ultra-handsome/talented/sophisticated "Sweets Princes" of the school occupy said group.AnimationNo expense was taken in making this series look fantastic. Episodes are full of still-frames, blandly-animated movements, and oftentimes only the characters' hair provides clues as to who they are. This is a blessing in disguise, however, as had the animation been better I would have been constantly craving the sweets featured in each episode. For this, my waistline is thankful. Everything about the visuals augments the series' bland cute factor. Each character sports an abnormally large head replete with almost equally-huge eyes, and the cast and scenery alike are decorated with a washed-out palette of pastels and copious amounts of sparkles.SoundWith a fluffy and unsubstantial opening track, and a score to match, Yumeiro Patissiere's music staunchly refuses to be memorable. If only the vocal work was so forgettable. The high-pitched chirpy voices of the cast sound like they were recorded in a vat of helium. Caramel's voice actor is the most egregious example- I'd swear she stuffed her mouth with cottonballs (or perhaps Novocaine) before recording.CharactersThe lead character Ichigo is such a stereotypical shoujo protagonist that it hurts. She's clumsy, scatterbrained, terrible at math, French, baking, and pretty much every other subject the school teaches. Luckily for her, everyone finds her klutziness "refreshing" and loves her anyway because she's adorable, optimistic, and always tries her best. In a word, she's boring. Speaking of shoujo clichés- you know the "Prince of the School" that every shoujo series has? Yumeiro Patissiere has three. Between the tsundere boy, reserved gentleman, and overly-exaggerated fop, every single preteen girl in the show's target demographic can find a suitor worthy of fawning over. Were I twelve, I'd be all woozy with hormones over this selection, but armed with few other personality traits, the "Sweets Princes" will have difficulty endearing themselves to a more seasoned audience. Furthermore, the fairies who serve as the series mascots never rise above being a cloyingly cutesy gimmick. While these type of characters rarely get any development, the show does make attempts at fleshing out the Fairy World yet fails to pay its inhabitants equal courtesy, making them feel especially half-baked. It's impossible to ignore glaring inadequacy in characterization when both the main and tacked-on secondary casts are so vapid and vexing.OverallYumeiro Patissiere is cute, inoffensive, and wholly generic. By no means the worst shoujo title available, it is still a far cry from the pinnacle of the genre. It makes decent marathon fodder, as it requires precisely zero thinking, but is otherwise hard to recommend. The series will appeal to those looking for a guidebook in shoujo clichés, or material for a case study in the ridiculous things that little girls think are sophisticated. Everyone else over the age of thirteen (mental or physical) would do well to steer clear.

Ahhh...This anime Okay, lets start with the characters: The main character is Amano Ichigo, a 14 year-old who dreams of becoming a pastry chef (a little bit too young if u ask me). She has a huge appetite for sweets, and one day, whilst pigging out, she came across a handsome foreigner who happened to make sweets for a living, his name was Henri Lucas, a French dude(so help me -_-). She talkes about her grandmama because one of the sweets she had eaten had tasted just like the one her grandma made, which surprises Henri. He allows her to taste his latest creation and is instantly amazed at what an amazing palate she has, and invites her to attend St. Marie Academy, a school for the culinary arts, concerning sweets. Now what I think about this girl. She had this certain quality that just makes her very likeable. She is clumsy, and a crybaby, two things I would normally hate in a heroine, but she is also determined. Her naturally oblivious and naive nature initially agreggated me, but she's 14, an amateur when it comes to love and success, and still has a lot of time to reflect. She had an innocent crush on Henri, which is natural, because he was the first male who is not her father to praise her, and she was not used to praise, having always failed at things like piano, swimming, ballet etc... Fun character. The Sweets Princes Kashino Makoto: Ichigo's frenemy and later love interest, which is weird because he hated her guts, because he came from a rough background, and he is determined to give his all when making sweets, despite being a sadistic tempermental freak, and he was furious with Ichigo's naive nature. Despite this, he is admired by his fellow classmates, and constantly crushed on by girls, especially Koshiro Miya, but we'll get to her later. This caused him to develop a derious hatred for the opposite gender. Now what I think about him. Well, he does have jealousy issues. He refuses to make a move on the girl, and constantly gloats over her interaction with other guys later on in the series. He has issues, but his family is no better. I guess Ichigo brightened his world a little bit, which is why I enjoy her so much.  Has issues, but come on, he's just sooo cute~(curse my girly fantasies) Hanabusa Satsuki: A narcisstic, but kind-hearted dude who likes to make sweets while incorperating things like roses and everything beautiful.  Imma just get to my opinion. He is cute, but a closest playboy, although he never broke hearts. His sweets are beautiful, and you can see the hard work her puts into them. One may argue that his backstory is not that effective to use. SOOOO CUTE. Andou Sennosuke: Probably the nicest guy one would ever meet in St. Marie. He specialises in Japanese sweets, this probably explains his calm and refined nature. The only problem is that he has no backstory at all, and if he did, I did not notice. It allows for little connection between the audience and this character. That aside, he does actually get his dream of opening a branch of his family's shop "Yumezuki", and at 16, that is pretty darn admirable. These three dudes all like Ichigo, but she picks her polar opposite Kashino, which is good, because she can teach him to be more open, and he can teach her to be more mature and professional.  *Koshiro Miya is an annoying psycopath who would stop at nothing to get Kashino's affection(though she never succeeded even through her several attempts of teen marriage) Now the story: It's a pretty nice story. Good for kids and teens, nothing harem or whatever. I like the ending and the events were well chosen. Romance: No, just no. Visuals:  The way the sweets are presented is absolutely beautiful. They look so delicious, and the description of the sweets and the professional tone they are taking when taking about the sweets is awesome. All in all, I really loved this series, I watched it several times and will continue to watch it again and again for years to come. :)

One of the reasons I started watching this anime was because it was about sweets.  I love sweets myself, so I thought I'd give this anime a try.  At first, I didn't think I would like the anime, but, surprisingly, I did!  It made me laugh, cry, and feel happy. The art of this anime was good.  The drawings of all the cakes and sweets just made me want to reach into the computer screen and grab them! Moving onto characters.  I liked Ichigo a lot, she made me laugh, and in some ways, we're similiar.  Kashino is one of my favorite characters as well.  But I did not like Chocolat.  Seriously, she got on my nerves, lol.  I also didn't like Miya, she was just annoying.  The other characters are okay, at least they didn't make me hate them, lol. Finally, I'd say if you like light, cheery animes then you should watch this, if you haven't already! 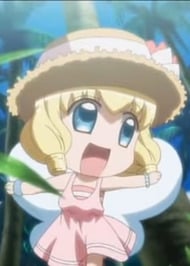 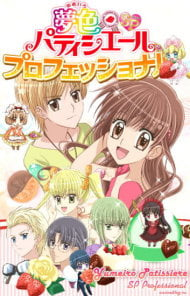 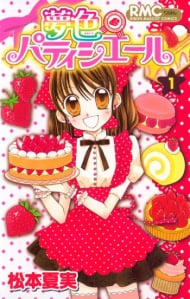