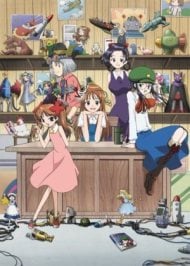 When people dream, they express their utmost desires and emotions within the confines of their mind; but when their strong emotions cross the border into reality, the dream can turn into an uncontrollable nightmare. Touko and Rinko are sisters known as "yume tsukai" (dream users), and their job is to take care of these nightmares. Using toys as weapons, the girls must both destroy the nightmare and return the dream to its rightful owner before the nightmare does any sort of serious damage. Have no fear, Touko and Rinko are here!

I finally managed to find this series on here after I managed to locate and recognize it's name after many fruitless searches. (Turns out there are a lot of animes about dreams...^ ^;) Anyhow- Yume Tsukai. It's weird.  "But Griffy!", you may ask, "Isn't anime always weird?" Let me explain. If you've read the summary, you are already aware that the series is about people hunting down rogue nightmares. Let me elaborate on what this entails. The dream users of Yume Tsukai operate out of a traditional temple and go around in miko like garb.  Ok, cool, it's Japan, makes sense. Carry on. The aunt stays at the temple while the rest of the team goes out on missions. She also has this power that I'm pretty sure does a thing and is important, but I forgot what it was because it's been so long since I watched it. But I can tell you with 100% that it is powered by virginity, as there's this machine-god thing in the temple that scans for it and blows off steam when ot confirms she's still is.  It doesn't do anything sketchy or inappropriate, it just loudly announces verification oof her virginity and that's it? This happens basically every episode, by the way, in a similar manner to the transformation sequences in magical girl shows. Ok, that's a bit odd, but can it get weirder than that? YES. The Yume Tsukai go out to help people whose nightmares have gotten out of hand due to thier secret desires. Do they go into dreams to fight them in a battle of the mind? No, don't be ridiculous- the nightmares come into the physical world where they cause havoc while the source of said dream is sickened and weakened by the emotional turmoil. In the second episode of the show, the Yume Tsukai try to help a sickly kid in a hospital, and the nightmare that attacks them is office supplies. No, not a monster made from office supplies, but giant scissors and super big versions of those stapler removers that look like little fangy mouths with what I can only describe as googly eyes, just, flying around. Did I mention that most people can't see these nightmares, so while the Yume Tsukai are fighting and running from the evil office supplies flying around these hospital corriders, to the perspective of anyone else, they're just these weirdos running around in miko robes yelling and swinging at nothing. It's a good thing the Yume Tsukai do this dream hunting thing because it's the right thing to do and not for recognition or fame, because they usually just kinda show up unannounced and sound like crazy people to everyone they encounter, except the times when the dream victims don't even know they were there. Honestly can't blame the minor chracters for thinking the Yume Tsukai are crazy though- if someone asked me why my son was dreaming of demon staplers, I'd be pretty confused. But it's not all weirdness. (Even if this is easily the weirdest anime I've ever watched, .) The show also deals with some more mature themes in a respectful, but nonexplicit manner, and it is a very entertaining watch, though I personally wouldn't recommend it for kids as said themes are nonetheless inappropriate for them, though more likely than not they'd fly over thier heads entirely and the critters would just be bored by the slower pace. The animation is also pretty good, though some of it has aged oddly. This is most noticeable with Rinko, who frequently appears crosseyed, even in the opening. Speaking of the opening and closing themes, I reccommend checking them out even if you aren't interested in this series, as they're both quite good. I especially reccommend checking out the opening theme animation for the unintentional hilarity. I could try explaining it, but you should just see it for yourself. Just trust me on this. Overall, this a short but strange anime that's not for everyone, but it has an interesting story- and plenty of oddities- for those willing to give it a shot. 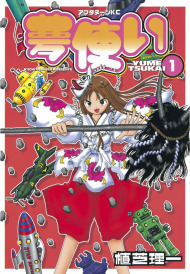