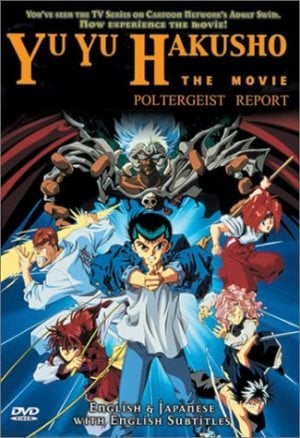 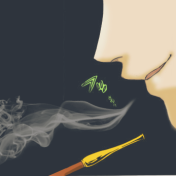 Despite the amazing source material of the original Yu Yu Hakusho anime, Poltergeist Report simply ends up being an entertaining fan fiction with lackluster original characters and a mediocre story. If you have a good sense of humor about the world of Yu Yu Hakusho and would like a little peek into Kurama's backstory, then this is a good watch.

Hinageshi was a generally obnoxious and helpless character, and I was generally irritated to find the the majority of her screen time involved Kurama saving her or protecting her from harm- Even in situations where she was not necessarily in immediate danger. The character design for Kurama's former ally Kuronoe was lovely, though the excuse for his appearance and his ultimate exit from the film were disappointing.

The battles and outcomes were at the very least entertaining and sufficiently believable, based on the power levels of the characters. Unfortunately, the movie does not clarify the point in the actual Yu Yu Hakusho canon that the events of the film are supposed to take place in, which makes it a bit harder to understand the motivations and experiences of the characters.

Despite the shortcomings of the movie, the animation was decent compared to the original series, and  is an entertaining movie to rewatch when you're looking for a slightly cheesy fix.