YU-NO: A Girl Who Chants Love at the Bound of This World - Recommendations 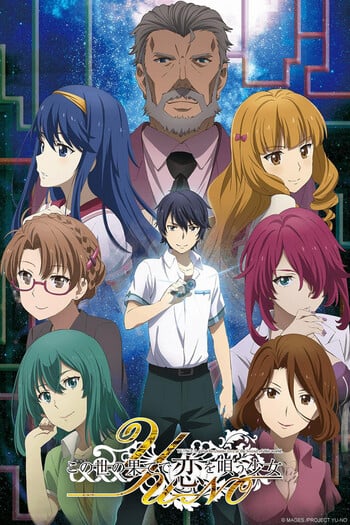 If you're looking for anime similar to YU-NO: A Girl Who Chants Love at the Bound of This World, you might like these titles.

As Sakura drowns in the murky darkness of the sins she has committed, Shirou’s vow to protect her at all costs leads him into a raging battle to put an end to the Holy Grail War. Will Shirou’s wish reach Sakura even as he challenges fate itself in a desperate battle against the rising tide?

The Fruit of Grisaia

Mihama Academy is a prison-like school built to preserve fruit that has fallen too far from its tree. It is home to five female students who each have their reasons for enrolling in the academy and live their life idly within the walls of Mihama. One day, Kazami Yuuji the institute’s first male student arrives and throws the orderly rhythm of Mihama off balance. Is Yuuji what the girls need to hold of their lives once more, or will the weight of their pasts prove too steep a wall to overcome? Or is his past even heavier than any of the others?

Tragedy has fallen upon Asakura’s family with the sudden loss of a loved one, leaving the devastated Junichi in agony and unable to support himself. A year has passed, and with the help of Kotori and many of Junichi’s supportive friends, he is finally ready to move on with his life with Kotori. However, despite Junichi’s attempt to start anew, Kotori is troubled with Junichi’s newfound decision...