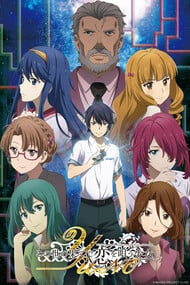 Tears That Can’t Be Stopped

Beyond a Pale Light

The Cause of the Curse

The Sparrows and Swallows Know Not

The Distance Between Him and Her

That Kiss, Once More

The Secret Under the White Coat

The overall of the story is some kid that can turn back time by going to parallel universes, and him trying to solve everyone's problems. In a nut shell, there is a mysterious mountain on the beach. There is several groups trying to uncover its secrets. The main person's dad found out you can use a tool to turn back time. His dad went off somewhere, and everyone assumed he is dead. The son (the main person) gets the tool, and tries to fix everyone's problems with it but while keeping it secret.  The show basically has a given problem or multiple that happens with a person he cares about it. Then he spends multiple episodes solving it. For example, his mom killed herself after some events. He tries to stop that for obvious reasons. But sometimes after fixing it, he is sent all the way to the start. So my biggest problem with this show is it can be very repetitive since you're seeing him redo things over and over. It also feels like no one grows since once the problem is solved, he is sent back to the start to fix a new problem while ignoring the old problems which is around again. I mean even the main character doesn't feel like he grown. The only thing that does grow is the story, but not by that much per show.  My other big problem with this is the show doesn't seem to know what it wants to be. It tries to be funny at times, then it tries to be a mystery, then it tried to be an action, and now it's trying to be a romance show. And by trying to do everything, it falls flat on everything. The main character goes from being dead serious to joking about sex in an uncharacteristic way in a split second. As far as who should watch this. I think if knowing what I said above, you are still thinking about it. Then it is worth a look. Otherwise, it's a hard pass.  _______Someone pointed out this show is based on a game. There is nothing in the anime pointing this out. But even if that is the case, the show in my opinion can't stand own it's own feet. I still stand by what I said above. If you're OK with what I said above, then go ahead. Beyond that I would say it's a hard pass.

Welcome to the world of YU-NO, a discombobulating place where most of the rules are made up and some of this shit makes no sense. But get its primary rule right and you’ll find it’s nothing but flowers from here on out. Primary rule being: that time does exist, but the concept of the universe, as you know it, is a flimsy object so easily twisted and forgotten in YU-NO’s filthy hands. See, the first mistake you could make with regards to this show is that it’s a series about time travel. Which – excuse you, you pleb, you stupid little normie – is totally not what this show is about. Nah, see, the thing YU-NO’s really about is parallel universes. In the world of YU-NO, the universe you currently inhabit is but one in a multitude. It’s just one of the many possibilities you could take in your lifetime, is what it’d like to say, but alas, witness how the whole thing crumbles in the face of only the perviest MC on the face of this planet. Well okay, to call him the absolute perviest MC on this side of the anime spectrum would be stretching the truth a little. Because see, while Takuya Arima-kun is a bit of a hentai freak, he is at least a classy hentai freak who only makes the saxophone-backed jokes when the time calls for it. And with this guy, smexy joke time is all the time. Pair this up with his undeniable charisma and it’ll be easy to see how one could so easily misinterpret this as a harem. Which it is, okay, let’s not get all pretentious about it – but like our pervy MC, YU-NO’s harem is a harem with class. And variety! There’s the hot mom who’s not really our MC’s mom, the voluptuous sensei, the sorta-villainous reporter chick who only really cares about the scoop she can get out of people, the ice-cold classmate with a mysterious past, the tsundere knowitall who thinks she’s being so sneaky by hiding her obvious feelings for MC, and the hapless lackey who follows our MC around like a lovesick puppy. So, to the point: it’s sort of a harem. But it’s a harem set in the midst of parallel worlds and devices that allow you to leap back in alternate histories to fix things… so that means it’s gotta be different somehow, no? Short answer: not really. But you do have to give this points for creativity in execution. Strip away that nonsense about this being your run-of-the-harem tale, and you still get some weird sci-fi adventure that should satisfy the most Steins;Gate-starved otaku to some extent. High-brow sci-fi story this is not. Say what you want about this, but YU-NO is still an endearing little romp through universes that picks up some of the tropes you know about the genre and points out all of their little absurdities for all of the worlds to hear. Isekai RKO outta nowhere notwithstanding, YU-NO is, at its heart, something that’s at least somewhat sincere about its funnies. It doesn’t hurt either that the characters, even if they’re tired and tried tropes of other cartoon people we’ve seen elsewhere, are all on the same page and so in the groove with each other. What this means is, the banter is swift and to the point, and you know that’s a thing that’s important in exposition-heavy material like this one. What this also means, unfortunately, is that you’re probably not going to remember any one of them a few months from now. I know I’m not. Which is something I could say about this show as a whole, now that I think about it. That, in sum, is maybe why I had such a soft spot for this the whole time this was on. But mate, if you asked me to explain things to you or even give you some hints to help you piece the plot together… I wouldn’t even know what to tell you. [This review was made for the Anime Lottery Game: Spring 2019 event. I know, I still can’t believe I stuck around with this thing for so long either.]

TL;DR:  Really good world creation, really good character creation, and absolutely terrible interpersonal writing that manages to waste everything that is really good about the world and characters for the sake of vicarious, self-gratifying wish fulfillment for those who long to be the unmatched center of attention and object of all desire. FULL REVIEW WITH CHARACTER DEVELOPEMENT SPOILERS.  DO NOT READ IF YOU WANT TO SIMPLY ENJOY YU-NO:  The world and overall story of YU-NO are creative and interesting enough that I really want to like this anime...I just can't.  The sad truth is that when I compliment the story, I am only speaking of the macro-scale story; the overall concept and mysterious hidden truth of YU-NO's worlds and timeline.  When it comes to the dialog and developement of the characters, every character is condemned to exist in, and be concluded with, some of the most predictable, boring, and childish writing I've seen in many years. Is the character a male other than the main protagonist, Takuya, or the villain?  Then the character will be an inconsiquential and unappreciated beta-male that exists to be:A. "the loveable screw-ups who mess things up time and time again."B. "the background filler characters that make the world look populated."C. "the victims who prove the severity of the risks by suffering or dying to make that point."D. "the unrequited love interests who show us how hopelessly fixated on Takuya almost every female character of significance either is or will become as the story progresses." Is the character a female?  Then the character will start off with interesting motivations and background, but will inevitably:A. "become a hopelessly, emotionally attached love-interest of Takuya who either gives into belonging, heart and soul, to Takuya or spends the rest of her time in the anime as an object of sexual tension that proves to us, the viewers, that Takuya clearly is just that desireable to all women.  This leads to that female eventually dying or being permanently whisked away as a dramatic and tragic motivator for Takuya with their final moments being vulnerable, emotional moments of deep personal connection to Takuya."B. "an unrequited love-interest, left behind to pine for Takuya as the one whose love they will continue to long for while contending with only lesser males for the rest of her life."...and once either female's story has reached it's emotional conclussion, Takuya simply gets on his way toward the next swooning female for the writers to trivialize.  NOTE: There is one female exception to this rule, arguably two.  Inevitably, though, any female character is doomed to either die as emotional fodder or be left behind, never to know the love of such a perfect being as Takuya... I've certainly enjoyed "OP main character", "harem" anime, but the "everyone falls into one of these exact character developement paths" treatement ruined otherwise good characters and the deeper, big-picture story of YU-NO for me.  The love fixations were completely unessecary nine times out of ten and the characters could have been allowed to exist as more diverse, emotional losses to Takuya as comrades who fell tragically along the way without the tired repetitions of "and now she's smitten before, oh no, tragedy for Takuya again". YU-NO: A Girl Who Chants Love at the Bound of This World Recap YU-NO: A Girl Who Chants Love at the Bound of This World Special 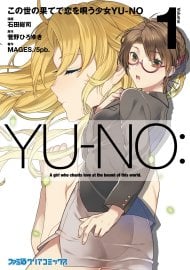 Kono Yo no Hate de Koi wo Utau Shoujo YU-NO