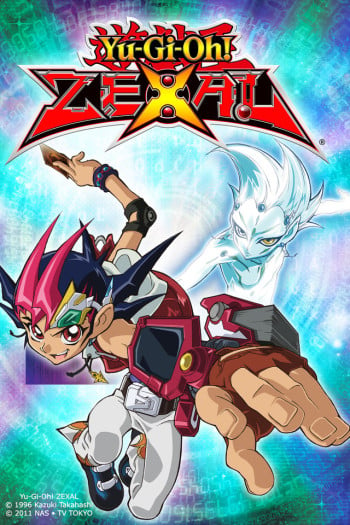 There are no spoilers in this review.

The story for Yu-Gi-Oh! Zexal is sadly lacking. The once great story of the original has yet to be followed up wth each of the sequel seasons becoming worse and worse. This series also can become extremely annoying with its use of themes, as the hints of friendship just don't sound like something anyone would ever say. They are not bad themes, they just aren't presented in the right way. The ideas of this story are horrible, as they are simply a copy of the plot of both the original series and Yu-Gi-Oh! 5D's. Overall, it's really a tragedy how bad this story is.

The animation of this series is fine, the characters don't look fake. The character design could use some work, as the hairstyles of people in this show is just plain weird. Overall, it looks nice, but could be better.

I don't see anything wrong with the sound. I can understand everything. Nothing is too loud. Overall, I have nothing to complain about in this part.

This is what blew it for me. Some of the characters are just so annoying, I don't know why I even continued to watch it sometimes. They talk way too much and many have a very annoying voice. In addition to this, they also have awful catch phrases, possibly the worst I've ever heard. However, they do a good job with character developement, but all the other flaws just overpower it completely. Overall, the characters are just so annoying and flawed, that it's hard to watch sometimes.

Overall, this series is not worth watching. While I felt obligated to see it through as a fan of all the previous series, I was extremely dissapointed with this one. The story was a copy, and the characters were so annoying that I wanted to just throw something at them. In general, this series was awful, and I hope the next one is better.