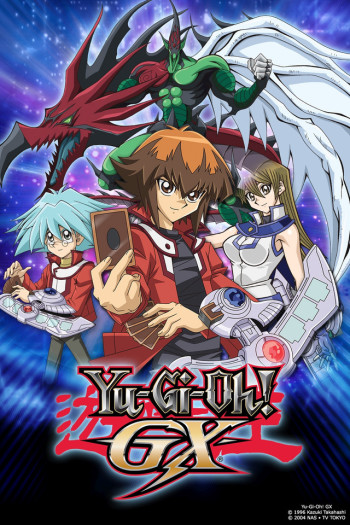 Let's start with the beginning...the opening and ending songs (Japanese version) were great the entire way through from what I can remember.  Even the first English dub opening is appropriate for the series and catchy, and is actually better than the dubbing job, itself.

I suggest, if you can, to watch it subbed; subtract 1-2 points from Overall and about 10 points from Sound for the English dub version, because it's that awful.

The anime, itself, started off strong with a Jounouchi (Joey)-like protagonist.  Unlike its predecessor, GX features your typical headstrong, hot blooded idiot of a main character with a perpetual cheerful attitude and a natural skill for the game.

However, the characters are extremely flat, especially the protagonist up until the third season where he changes too drastically and suddenly.

GX, like its predecessor, has the WORST assortment of side-kicks in terms of skill level and screen time.  Shou (Syrus) and Hayato (Chumley) are jokes for the majority of the first season, then eventually fade into the background halfway through the second season (Hayato vanishes completely).  Shou remains as a supporting character throughout the series (with a couple episodes involving him as more than a cheer squad), but it would have been nice to see him and some of the others get a larger role.

The third and fourth seasons also completely killed the show.  The third season brought in new characters that all but replaced some of the characters we grew to love in the first two seasons.  The fourth season, with the exception of a couple episodes, was actually painful to watch until the final two episodes.

If you like an anime packed full of cliches where it's the main protagonist that handles 99.9% of everything that happens, and everyone else winds up as a cheer squad, then you'll like this anime.  It has the typical shounen protagonist, as well as just about every shounen cliche you can find.

If you want an anime where the lead characters (plural, not just the main protagonist) grow and continue to shine and work together through the entire series in every season, and the plot is interesting, engaging, and slightly mysterious, then this anime is not for you.

I might be biased in saying this, but by far, this is the best Yu-Gi-Oh anime of all time.

Yes, the first two seasons are slow and they did make some budget cuts in the animation department early on (Alexis and Zane scene). But overall, it's solid for it's time and the fact that it utilizes no 3D animation of any kind is marvelous and a huge problem with Yu-Gi-Oh 5Ds and onward.

I went a little off track there, apologies, but yes, the story isn't much to look at at first glance, duel academy with a dark twist, but after you unravel the past of the main protagonist Judai (or for you dub watchers, Jaden), you start to really get into the story, past season 2 of course. Don't get me wrong, the Shadow Riders had some potential, but were mostly underwhelming and the Society of Light was an interesting concept, but executed poorly. By far, the best arc of all of Yu-Gi-Oh, is the Dark Dimension arc. Which boasts some of the best villains and reveals most of the backstory of our protagonist.

Like I said before, the animation is your run of the mill Yu-Gi-Oh art style, though I have to commend them for not using any 3D animation, leaving us with awesome looking boss monsters who feel like they're right at home in the anime, unlike for example, Yuya Sakaki's Odd-Eyes Pendulum Dragon, which doesn't mesh well with the traditional animation.

All of the sub openings are amazing, showing the state of our beloved Judai slowly shift. At the start of the anime, you already know you're going to have a blast, but as you go on, you start to feel for the ops, which fit marvelously with the story. I'd say the same for the dub, but it gets old pretty fast, what with not including season 4 and the last bit of season 3, it doesn't show anything apart from a song that's supposed to get you pumped for the show, and that it does well. The idle sounds, incorporating an electric guitar, similar to the changing scene of an old Disney show, is also a nice touch.

Now then, onto the characters. I can't imagine a Yu-Gi-Oh series with a deeper and darker premise than Yu-Gi-Oh GX, if you try and say Yu-Gi-Oh 5Ds, I'll tell you to shove that power of friendship up your ass and watch all of GX. The protagonist is a blank canvas at first whose whole purpose is for us to put ourselves in his shoes. Meanwhile, the reason he's bland in the beginning is because of a traumatic childhood that I won't spoil in this review. My point is, yes most of the supporting cast did get pushed to the side, apart from Chazz, who had his arc and only then was pushed aside. But the reason for that is that his "friends" put him in the leadership position against his will and when the new student in season 3 arrives, along with the rest. (Fuck you Amon) treated him as an equal, of course he wanted to spend more time with him, again, no spoilers.

All in all, it's definitely worth the watch, yes, you'll have to watch the first two seasons, but once you get to the middle of season 3, you won't be disappointed.

i might be a little bit biased because its my favorite yugioh series and maybe even my favorite anime but honestly i loved jadens story how he came to the realisation that life isnt always going to be having fun but it can actually be really dark thats how his character is potrayed from the kid that is always excited to a person that shares a body with an evil spirit even becoming a dark knight that almost kills his friends after that he learns  that there are going to be  tough times and that he is going to have to get over them and have a smile on his face,Now for the characters i really enjoeyd everyone in the cast especially chazz was a great early on villain syrus had a great backround and developpment based on his story with his brother alexis was a little bland but she was ok also crowler was the funniest jessi and aster were great and lastly zayn and bastion who needed more screentime.Now for the animation and sounds they were pretty shit some times in the first seasons but they didnt change my overall opinion over the episodes and got better later on.Lastly the story was a little slow in the first 2 seasons but was AMAZING in the last 2 which technically was the real story,This is MY opinion pls let me know in a comment.

About the same for the original series of yugioh duel monsters. I enjoyed watching the entire series although it wasn't the same as the original that i like better. i reccomend the orignal overall though.