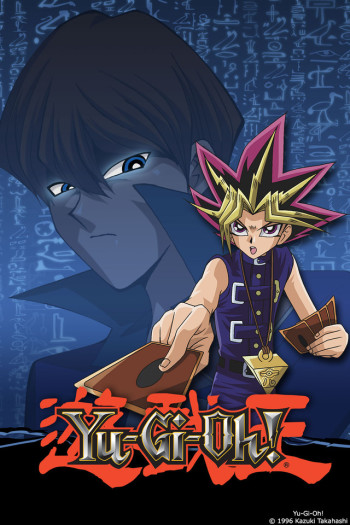 It's hard to critique this anime's storyline, not because it doesn't have one, which it does, but because throughout the five seasons, there are several different plots. However, the underlying story is that the Pharaoh Yami Yugi/Atem is trying to recover his memories.

Though it may take a little while in getting to explanations of what exactly is going on, the creators made sure to explain it through the characters.

I find the story interesting because it has links to Ancient Egypt--something that interests anyone, if only a little.

In the first season, the animation seems a bit old. Almost as if it were from the 80's. However as time passes and we get into the last four seasons, the animation improves dramatically. Though it could have still been better, the fluidity of each detail of every monster being destroyed and the flowing of water made it seem more realistic.

In the original Japanese version of the opening theme, the songs are almost perfect. In the English version, the theme always stays the same, almost in an annoying way. The sound effects were very realistic and the background music during an episode was always fitting for the situation. Whether it was soft music for times of relaxing or intense music for times of action, it always increased the experience of watching the anime to exciting heights.

One of the best things for an anime to do for its characters is to provide backstory on them. It really helps to relate to a character. Though we don't get much backstory and most of our characters, we get plenty of character development during the first season and the third seasons, the former being for "the gang" and the latter being for Seto and Mokuba Kaiba. I really liked the mixture of different personalities.

Overall, this is an enjoyable anime that may or may not pull at the heartstrings. We all love games and this anime combines, card games with adventure and fighting evil. It's the perfect anime if you want to watch rivalries between friends and foes, fighting evil, ancient mythology (Ancient Egypt, Atlantis), alter egos, and fighting monsters.

I am scoring this based on it being for children and being a childrens anime, not as a anime for all ages or anime in general!

Okay, so I know I watched at least some of this because I recognize the story but I don't recall watching over 200 episodes. When I rewatched I watched 40 episodes but that doesn't make any sense either. Anyway, I will just put my review here. I Liked Yu-gi-oh when I was young, and I still say it's better than Pokemon. I quite after the main character was no longer Yugi though and the new stuff is no good to me. Rewatching it now, I find it slightly annoying. Heart of the cards, friendship blah blah blah, etc is a bit much for me now but I guess it isn't as annoying when you are a kid. At least there weren't a bunch of characters that looked the same and had the same name playing the same role everywhere he went (like pokemon) and it does get kind of dark at times more so than Pokemon. (I'm comparing it to pokemon because Yugioh and Pokemon were the two main series for card games and stuff of a similar nature when I was a kid). The pokemon may have been cuter, but that was about it. I personally think Yu-gi-oh is a bit more mature than pokemon or digimon. Of course, at 22, they all seem silly.

Where I lived as a kid, Pokemon was the thing. If someone played a card game or collected cards, it was Pokemon. I support Yu-gi-oh. I don't get pokemon being a card game. At least in Yu-gi-oh, they actually use cards IN THE ANIME. In pokemon they use living creatures. If one of those shows should sell actual cards it's Yu-gi-oh.

Anyway, I think it's a good show for younger people. It is mature but still fun and easy to understand for children, plus the cards are cheaper. It has some good lessons in it unlike a lot of junk on tv now days. For adults, I won't recomend it. For children 12 and under, I would recomend it.

The characters do develop and are not completely one dimensional. They teach some good lessons about friendship, believing, power isn't everything, etc. It can be comical and serious, light and dark. The characters are likable and somewhat realistic. While it is about card games, the situations can relate to real life. It is directed towards both genders. The story doesn't repeat itself repetively without making any real progress like pokemon. You might get a tiny bit of Egyptian history out of it. Overall, I give it a 8.5 for children.

Although it is by no means the greatest anime ever, I have to pay homage to Yu-Gi-Oh! Duel Monsters as the anime that got me into anime. It's up there with Sailor Moon, although it came slightly later. I can remember watching badly dubbed episodes of Sailor Moon as a very small child, which eventually drew me back to anime as a teenager, but it was Yu-Gi-Oh! that was on pretty much constantly between the ages of 6 and 12, by which time I had turned off the kiddie channels it played on. I watched them all as a kid; Pokemon, Yu-Gi-Oh!, Avatar: The Last Airbender (though technically not anime), Sailor Moon. If it was on Cartoon Network, Boomerang or Jetix, I watched it. And the score was boosted by two just for Yugi's hair.

The reason I have rated Yu-Gi-Oh! so highly is because I can't not like it. Although it is extremely generic, every single episode is pretty lame, and it's a show about a children's trading card game with added evil spirits from Ancient Egypt, I found the plot compelling at the time. I was never a trading card fan and I never owned my own deck, but I loved the anime passionately. I must have watched the series at least five times over. The tales of friendship and loyalty stuck with me to this day, and although it is incredibly cheesy to admit, I still watch it sometimes. I even tried watching Yu-Gi-Oh! Zexal recently, but I can't bare the raping of the franchise any more.

Of course, half the 'modern' allure to Yu-Gi-Oh! is from LittleKuriboh's fantastic Yu-Gi-Oh! Abridged, possibly my favourite thing to grace the internet since it's creation. If you haven't seen it, go watch it now. Of course, it was great to realise that I wasn't the only person over the age of eight who likes Yu-Gi-Oh!

Yu-Gi-Oh! is a about a boy name Yugi who solved an Egyptian artefact call the Millennium Puzzle and by doing so melded his spirit with a 5000 year old Egyptian pharaoh. This pharaoh cannot remember anything about his past, not even his name. Yugi plays a popular card game, called duel monsters, which players build a deck then battle each other until the opposition’s life points are depleted. After defeating the current world champion, Seto Kaiba, in an unofficial duel the card game’s creator, Pegasus, forces Yugi to enter this tournament by capturing his grandpa’s soul. Yugi must enter the tournament and defeat Pegasus to save his grandpa soul.

As you can tell the story is quite complicated and it spans over 224 episodes. There are plenty of side stories and diversion to the main goal however the main group of characters stay constant throughout the entire anime. The main change is that when one enemy is defeated another new more powerful opponent appears to take over the world.

The surprising thing is that I have actually watched all 224 episodes at least twice. Never in wildest dreams did I think that watch other people play a card game could be so interesting. The battle can be intense, surprising and thrilling. They are well paced and thoroughly a joy to watch. The main themes in this anime is friendship, courage and bravely.

The mix of characters is just right. There is a little romance tension in this anime which common for shounen anime which is a nice touch. The characters are very well developed and their back stories are told in a nice and informative way adding great depth to them. You really feel for the characters and want them to succeed.

Overall I have to say I loved this anime. It is gem and defiantly worth watching the whole 224 episodes. Do not be discouraged by the length because once you start they will fly by in a flash and then you will want to rewatch them just to compare to the beginning because over the span of the anime the characters go through wonder transformations.

I'm writing this review for the entire Yu Gi Oh franchise because I'm too lazy to write all of them.

So a bunch of kids are going around with cards with special powers instead of going to school. Oh joy!

I wanted to make that comment first to describe the mood of the show. It's not supposed to be super logical, like pokemon. I mean, you're not really supposed to wonder if you're allowed to just leave your home at age 10 to wander around with stranger kids who are just like you trying to catch magical creatures. Same thing here; everybody plays this epic card game. apparently it is extremely important because of their bonds with the cards and their friends.

Next characters. For each different Yu Gi Oh show, we are introduced to a differnt group of friends who like to play cards together. For now, Ill be focusing mainly on the Duel Monsters, GX, and the 5D series because those are the ones I've watched.

For this type of show, don't expect the main character to loose very much. Sure, they may loose one or two major battles throughout the entire show, but usually, it's almost certain that our hero will make a comeback at the last minute every time. For this show, instead of being caught up with who is going to loose, you just enjoy watching the main character win.

The story as I have said, is mainly repetitive and predictable. Major themes are quite easy to understand, like friendship, trust, and hope. Well, for each show in the franchise the theme and story may vary a little, with varius evil beings trying to either destroy or control the world. Out of them, the show with the lightest, least heavily dark plot is GX, since they are never serious in Duel Academia, and the theme is more about learning to have fun playing and good sport. Duel monsters on the other hand starts out silly but soon goes down very dark, even though the fact that we all know our Pharaoh will prevail, and centers it's theme more on the friendship between the duelers. 5D's dystopian world of card games is also more similar to the Duel Monsters's overall tone. Maybe darker, but I haven't finished that show yet, so Ill just end this review here.