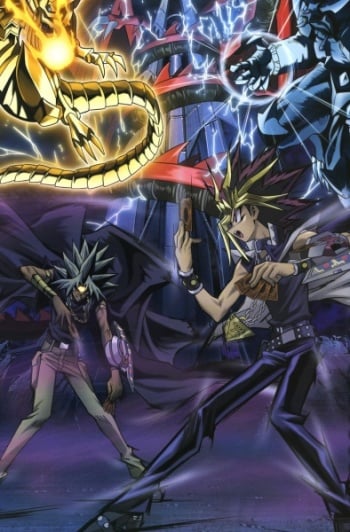 If you're looking for anime similar to Yu-Gi-Oh! Duel Monsters: Battle City Special, you might like these titles.

Yu-Gi-Oh! The Dark Side of Dimensions Special: Eien no Rival - Yugi to Kaiba!

Yuusei Fudou and Jack Atlas go head-to-head in the Duel Stadium once again with the title of "King of Riding Duels" on the line. As Stardust Dragon and Red Demon's Dragon clash, both Duelists activate "Buster Mode" and unleash powerful new forms of their ace monsters.

With the help of the power of the Pharaoh, Yugi Moto has earned the reputation of being the “King of Games.” But Seto Kaiba finally has a plan to bring down his rival, and with his new and powerful cards, he might finally have a chance of succeeding. Meanwhile, a new artifact known as the Pyramid of Light has captured the attention of Yugi and the gang, as it bears a striking resemblance to the Millennium Puzzle. Soon, Seto and Yugi will face each other in an epic battle – but something mysterious is at work. Will Yugi, the Pharaoh’s wistful strategies and the Egyptian God Cards be enough to put a stop to the ultimate foe?

The story takes place six months after the end of the original series, when Yugi Muto and his friends are preparing to graduate from high school. While Yugi still feels like he's lost a part of himself, he's come to terms with the Pharaoh's passing, now looking forward to a future alongside his classmates. However, other people may not be so willing to let the past alone.