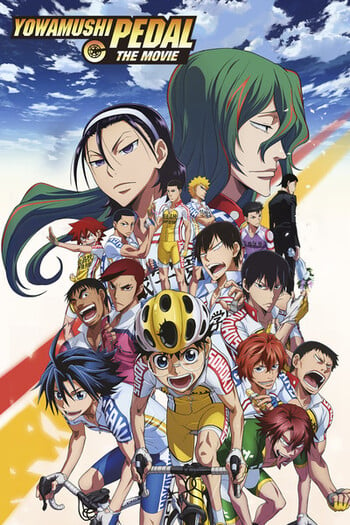 Maiharu Hiromi has moved from Nagasaki to Kamakura at the start of her high school years. Kamakura is a beautiful, mountainous place, with a view of the sea and Mt. Fuji, and Hiromi is thrilled to explore the area. Hiromi hasn't ridden a bike since she was very young, but she attempts to ride to her first day of school anyway. In her case, riding a bike does not come naturally, and she ends up bumping into her first friend, Tomoe, who helps her learn how to ride. It turns out Tomoe is going to be in Hiromi's class, and their teacher is also a cyclist. Now Hiromi's exciting high school life, full of new friends and learning about cycling is about to start.

"Keirin" is a bicycle race in which professional cyclists race against each other. This is a real sport with physically trained athletes that collide into each other brutally towards the finish line at speeds of up to 70 KM per hour, but it is also an exciting form of gambling that one can enter.

But my sense of balance is so bad that I can’t… That’s the trauma that high schooler Tsubame Ogawa has had to bear up under all these years. But starting when he meets naive rich boy Wada and joins the Bicycle club, he gets bound up in the terrifying world of cycling! Can’t Ride a Bike is a youth lifestyle comedy with a bunch of ridiculous young men!