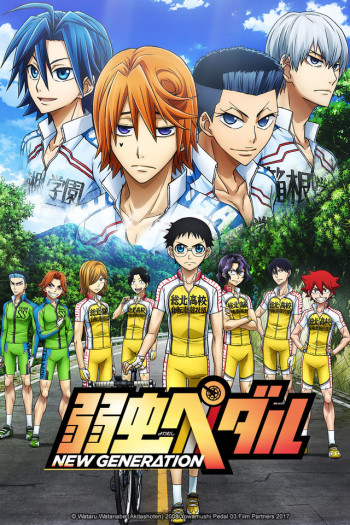 This is by far the worst season.

Yowamushi Pedal quickly carved out it's place in my heart. I'm always excited for the next episode, and I'd genuinely say that -until this current season- I'd rank it as one of my favorite sports anime to date.

That said, I feel like the mangaka never thought he'd continue the story past the first inter-high, and didn't make any plans to until after the show became a hit. This season is a half-assed effort to develope side characters well enough to fit in with the MC's.

It's bad, but that's to be expected, and I cant bring myself to lower the character and story scores quite yet because I'm hoping that this stunt will pay off and lead us all back to the hair-raising tension and heart-pounding movement that the previous seasons delivered so well. If I'm right, though, theyre moving the story along so fast because they want to set the team up for a loss, milk the team's feelings, and then have them win the MC's senior year.

*My first positive point is something that YP already did very good in its first part and continued to do here in the second part. And that is exploring the side characters and giving them backstories and their time in the spotlights. In YP:NG we not only get to know new characters like Kaburagi and Koga but also some older characters get their time to shine. Both Teshima and Sugimoto have their arcs where we explore their characters. And there are still many more new characters who have been introduced and still need backstory. That will be something for the 4th season.

*Another thing that this new season of YP keeps doing is giving its viewers actual, detailed information about cycling and racing. Most of the basics were already covered in the first 2 seasons but this second season was still very informative like how this anime shows the pressure that comes with wearing number 1. The advantages and disadvantages that Onoda experiences with this tag. Or the danger that lies in the way how Manami rides, I actually expected him to have mechanical problems already in Grande Road. Also what his opponent does after that is a topic that’s widely discussed in real life cycling even recently in the Tour de France. There is an unwritten rule in cycling that you don’t attack when your opponent has mechanical problems but there are very opposing opinions about that rule. So it was nice that NG explored that since people will have different opinion about what Manami’s opponent did.

*And my final positive point is that for a cycling fan like me, YP is still such a joy to watch. The cycling itself is so realistic and relatable. Now this is still an anime so there are things that are overexaggerated like how Aoyagi blows up like a balloon. But overall YP gives a very realistic and lively presentation of what cycling is about and why I personally love it so much.

*Now if I compare this new season with the last 2 seasons than I have to say that NG doesn’t bring anything new to the table. The set-up and progression of this season is exactly the same as in the first part. We’re still preparing the team for the Inter High. So maybe YP should have mixed up things a bit in this new season because now you don’t see anything new in terms of the big story.

*And a second thing was that with the 3rd years gone, we lost a lot of very charismatic characters. All the 3rd years had very interesting personalities and it added to the vibe that YP had. Like my favorite characters, Kinjou and Arakita are gone now and I missed their personalities. I also wonder if that one meeting between them at university was a hint towards a possible spin-off. Now we lost quite some charisma but as I said in my positive section, there are still a lot characters who haven’t been covered yet and there are quite some interesting ones between them like Komari who might be an even bigger creep than Midousuji.

*Also I noticed that Imazumi got very little screen time in NG. Onoda is still the main character despite also getting less attention and Naruko has his own arc at the beginning. But Imazumi even talks very little in this 3rd season. Now I expect him to come more to the foreground in the 4th season since he’s the ace so he has to go for it at the end of the stages where we’re getting to now.

So as a conclusion, I still love YP, it is still the best cycling anime out there. I wished this new season would have mixed things up and didn’t deliver the exact same story as the first 2 seasons. But either way I had a great time watching this new season and I look forward to the 4th season which will air in Winter 2018. So overall I’m going to rate Yowamushi Pedal: New Generation slightly lower than its precedents at 3,5 stars. The 4th season still had a lot of ground to cover when it comes to giving backstories for new characters and exploring their personalities so that gives me plenty to look forward to.