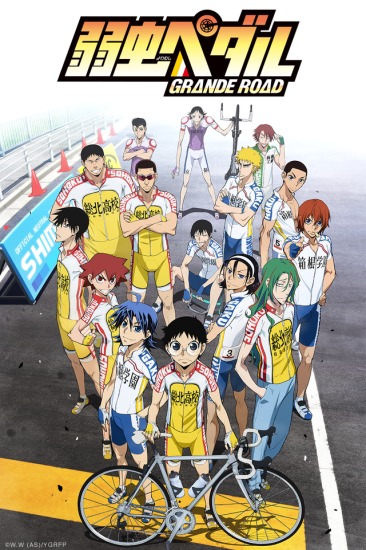 Best Anime Ever .. everything is Awesome The Storyline, the characters even the Animation is Awesome .... I truly wish We get A 3rd  season .

Second season of Yowamushi Pedal series. The continuation and conclusion of the interhigh.

This second season picks up where the first left off and continues to the conclusion of the interhigh. The race was exciting, fun, and I was on the edge of my seat the entire time... I had a blast! xD I hope they do another season one of these days, even though we'll end up with different characters as the third years will be graduating out ... but I think that would actually add more fun to see who they'd pull into the club next! Also, totally loved the conclusion of the race! It was exciting! xD

Following up the first season of Yowamushi Pedal, YP: Grande Road completes the last two days of the three-day grueling Inter-High bike race.  The second season continues the snail-paced high-speed narrative of finding glory in finding the depths of one's endurance.  I mean the endurance of the racer, not necessarily the anime watcher subjected to this blend of personal grit, biking strategy, and brooding philosophy.

Theoretically, the anime-crazed otaku Sakamichi Onoda is the MC of the Yowamushi Pedal franchise.  Theoretically, since there are a lot of competitors in the Inter-High, we gain a ton of backstories and introspections which come during mid-sprint, mid-climb, or some other crucial portion of the race to slow the action ... all in the name of something called suspense.  But some of these backgrounds of the opposition can be enlightening.  For a few episodes, I had a more sympathetic opinion of Akira Midousuji, that long-tongued low-life manipulator of anxiety and things 'gross.'  It didn't last long as MIdousuji continued his mind games until ...

Grande Road brings us to the brutal final day of the Inter-High, where the unforgiving climb up the lower slopes of Mt. Fuji is so grinding that many racers succumb to the agony and pressure.  But the last two episodes, the final .5km (three tenths of a mile) is gutted out.  People, Olympic speed-walkers could do their thing at a peppier pace.  The last five meters ... a full ten seconds of intense slo-mo.  And the winner?  Theoretically, there are loads of possibilities, many racers who have trained unmercifully, who could win ... or fall out of the contest because they didn't have the 'right stuff.'

The 'right stuff' for Yowamushi Pedal has to be the music, a series to hard-driving anthems that salute the pure fortitude the bike racer must exhibit.  Onoda would be the first to tell you that quitting is easy.  Sticking to it is hard.  The animation is broken into series of static shots, clever omake moments, and elaborate backgrounds (often displayed as we reach key parts of the race).  Nothing elaborate, just well-woven together segments which gives you the feeling of the excitement of the flat-out sprint, the grueling climb, the comradery of the pack, and the solitude of the racer who makes the move to distance himself from the rest.

What lies beyond the Inter-High for Onoda and company?  TMS Entertainment continues to crack out the following seasons, movies, and specials.  Yowamushi Pedal is a hot item, once you get used to those moments of pause and reflect.

I FOUND MY FAVORITE ANIME!!