You're Being Summoned, Azazel Z - Recommendations 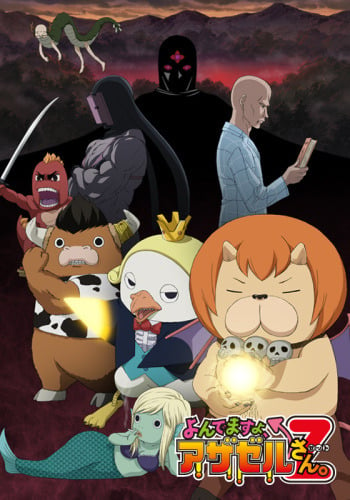 If you're looking for manga similar to You're Being Summoned, Azazel Z, you might like these titles.

Shinnosuke Nohara is a crude and rude five-year-old child with a penchant for dirty and inappropriate comments. Whether he's blackmailing his mother for an allowance, dropping his drawers, or snubbing girls at the playground, there's nothing the lecherous Shin-chan can't enjoy. Along with his dysfunctional family and wacky friends, Shin-chan will tackle life's daily problems - one exciting moment at a time!

If you come by this girl, you better be extremely careful - nobody knows what kind of prank she will play the next moment! She practically lives to cause mischief!

Sasshi's world is in disarray. His best gal pal, Arumi, is about to move away, and his Osaka neighborhood is being demolished in the name of urban renewal. However, this little neighborhood has some surprises under its concrete -- it's actually a portal to parallel universes. And when this section of the city is leveled, the portal is cracked wide open. Sasshi and Arumi soon find themselves being hurtled from one strange world to the next! Making matters even more surreal, is the fact that these worlds seem to spoof and mock popular movies, video games, manga and anime.

Always ridiculous, always irreverent, and sometimes flat out raunchy, each punchline reminds us that hey, life isn't that bad after all...until when it is. But we can still laugh at it!