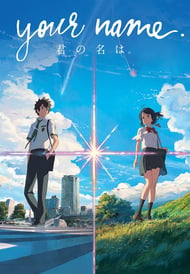 Okay so the movie premiered in Japan yesterday and I went to watch it today.I should admit that I was thinking this is going to be one of Shinkai Makoto's regular movies, where nothing really makes sense, but everything is so beautiful, animation is astounding, music is emotional, and for some reason you are left with tears, some bittersweet emotions, etc.Shinkai Makoto is one of my favourite directors, if not THE favourite, but I usually don't like his stories as much as the mood he creates. I am always left with some sort of disappointment in the end. But that doesn't keep me from adoring his works.「君の名は」had been advertised as hell in Japan for the past 2 months or so. Even in the university we got advertisements for Shinkai Makoto's upcoming movie. So it was kind of a given you'd want to go watch it asap. Just like I did.Now, I'm not going to talk about the story itself, since most of you guys won't be able to watch it until the DVD/BD are released, which usually takes a year or something. I am just going to say that this was absolutely, by all means Shikai's masterpiece. My favourite so far has been Kotonoha no Niwa, but Kimi no Na wa is on a totally different level. At first it gave of the feeling of 5 cm per Second. But it was different, in a unique, amazing, sweet, lovable way.The story was splendid, the ending was splendid, the setting was amazing. Everything about this anime was perfect. I can't even point out a single drawback or con. It was just that good. No it wasn't just that good. It was wonderful, marvellous, fascinating.At the end I teared up real bad, and I am still under the impressions of this movie which is why I am here writing this right now. I do not usually give this high ratings to stuff, because after watching a fair amount of anime I started disliking most of the stuff I watch, rather than liking. But I will rate Kimi no Na Wa 10/10 with no regrets. I wrote above that this is Shinkai's masterpiece, and now I am going to say why. For most people 5 cm per Second is his best work. Some of his other movies have some supernatural forces. Kotonoha no Niwa was your regular slice of life story. Kanojo to Kanojo no Neko was mostly based on the concept of relationships. Now then, why is Kimi no Na wa the best? Because it included every best detail from previous Shinkai Makoto movies. Music was written by an accomplished Japanese band called Radwimps. I tried finding the OST CD which was released 3 days ago, but it was sold out in all of the biggest CD shops of the city. That comes to tell how amazing, emotional, sensual soundtrack this anime has. The animation.. I don't think you need me to tell you that Shinkai Makoto's animation is out of this world. But then again, he had improved, it had gotten so much better since Kotonoha no Niwa. Last but not least, the best part of the story were the characters. Their development, their relationship. Their connection, their bonds and their love. I just can say for sure, that I wouldn't be surprised if he doesn't release anything new for a couple of years, because this movie had tremendous work done on it. Kudos to Shinkai sensei for always getting better with every single work he produces. 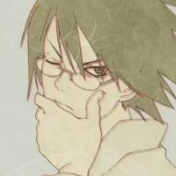 A film which shows Japan's best capacity to produce stunning animation, cinematography and backgrounds but these elements alone to not quantify to a great film.  (Spoilers below) STORY: I went out to see this movie after hearing only about how successfully it was in the overseas box office. Otherwise I went in blind to the story and anything else, really. My first impressions on the film were rather neutral. Beginning with the male character groping the breasts of the female character was an akward and unpleasent way to introduce the film. I felt this sort of exploration and jokes would be inevitable and even funny when presented in the right moment, but immediate sexualization of a high(middle?) school girl seems hardly appropriate for what seemed like a family friendly movie. And I'm going to make a bit of an aside here: I'm not sure if this is an anime movie thing as I've only watched the big classics (Ghibli, Akira ect.) but the use of 'openings' in the film was kind of distracting and unusual, giving the movie the air or wanting to be a seralized TV show. The songs didn't quite give the feeling of a montage, and neither revealed change and character like a musical number would. Also i might as well make the connection to this film being a lesser version of Erased, but it probably isn't fair given how they likely began production before Erased even began as a project.  On to some things I liked: I enjoyed the little interactions the two character shared as they dealt with the prospect of sharing bodies at random times. It was fun watching each of the feminine and male tropes actually work for the betterment of each other's character and situations. As slice of life it was entertaining, just not unexpected.  Some issue with the story I had was is felt flat and predictable, and some areas left gaping plot holes. For example Mitsuha convincing her father to evacuate the city was completely off screen and unexplained, which was a huge loss given how it was set up to be a definitive point on her growth. Also given the timing of events it would have been too late to evacuate anyways. Also I found it odd that once the character's were aquiainted enough they never tried talking over the phone until it was plot convenient. While it wasn't crucial I also wished their was a better explanation for the spirit phenomenon given how often tradition and mysticism are brought up. While many have praised the film for being a great love story and tearjerking, I felt that these emotions were induced by manipulation. Twice the characters inexplicably begin to forget each other, for very little reason other than to make the audience sad and relieved once they could be united again.  ART: This film felt like what would be produced if your average anime had unlimited budget. Many shots are breathtaking, and feature many 3D pans and light effects. While it was undeniably pretty I felt it was overall a bit too generic. Unlike the cinematography of other films such as Wolf Children and Erased these visuals lacked variety to carry the story's points. The quality was consistent but lacked needed constrast you would see between moments of peace and humor and those of great struggle and remonition. Instead I felt that every moment was trying ot be loud, making it hard to be consistently invested when the film should of demanded it. I also felt that the only reason the film was over 2 hours was because of the indulgent number of evironment backgrounds. Many shots very overused and diffused pacing, like the ten times they used the door closing shot or the five helicoptor pans of the tree at the end of the film (which was physically incorrect anyways). Unlike the cinematography of say, Ozu films, these shots did not contribute to tone or story, but instead seemed to be randomly placed as a pretty product of an artist.  CONCLUSION: Overall I don't want to insult the tastes of anyone who enjoyed the film. I can understand why it had broad appeal, and if you enjoy slice of life drama than you will likely enjoy this film. I personally felt that the meat of the film was missing, overshadowed by its aesthetic and budget. It lacked depth necessary to be memorable and revealing to the human condition.

What a beautiful story line with amazing cinematography! Having just finished watching this amazing movie, I felt compelled to write this review to shed some light in this masterpiece. Story Kimi no Na wa is an amazing movie following the lives of two teens that somehow have a connection. The reason/purpose of this connection is (as you guessed it) not initially clear, but as the story goes on we are not only left with a deep understanding of the reasoning per se, but also with an appreciation for the spiritual/fated sense of life. Confusing statement? Make sure you give this movie a chance so you can understand what I mean by that. The plot itself may not be very original; in fact, this reminded me a lot of The Lake House movie. This has been done before but the difference here is the quality of the work. Kimi no Na Wa has a perfect pace, great character growth, amazing graphics, beautiful music and is innovative in the way to go about the plot. Having these many good points, it’s no surprise the result was such a heartwarming story. Complaints? Yes, I do wonder about a few things here and there that are not quite explained in the movie. Being a modern world and all, how could they not have exchanged phone numbers in the first place? Did Mitsuha forgot how to go to Taki’s apartment when she attempted to go to Tokyo? (She had done these things before…) Surely when dealing with time gaps there will always be some loose ends. I found that despite the obvious questions, I still loved the movie very much. Animation I think the animation was by far the strongest point for this movie. They probably had a substantial budget to make those amazing graphics. This part did not disappoint at all. I was awed by the quality of the graphics including the colors used, the character design and the scenery that was portrayed. In one word: OUTSTANDING! Sound The soundtrack for the movie was very fitting and refreshing. I enjoyed it so much I will most likely look it up to listen to it some more.  The voices for the characters were nice as well and very fitting. Characters The story revolves around the two main characters: Mitsuha and Taki. You could say they have completely opposite lifestyles but their personalities are not as mismatched. It’s challenging to develop characters in a movie due to the limited time given to develop a story and finish it but I felt that this movie did an amazing job in this area as well. Both main characters are relatable and consequently, very likable. The things they do are consistent with their age, gender, and lifestyles so it was not difficult to put yourself in their shoes as the story unravels. Overall I highly recommend this movie to anyone that enjoys a good romance story and it’s not bothered by supernatural/spiritual themes. If the art is important to you, you are in for a treat as well. 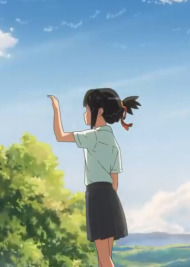 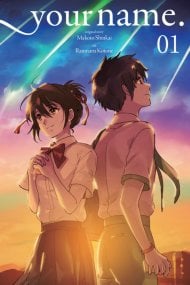 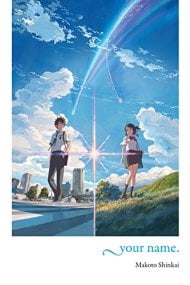 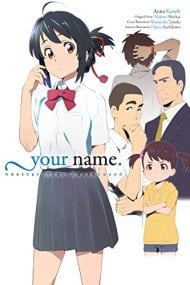 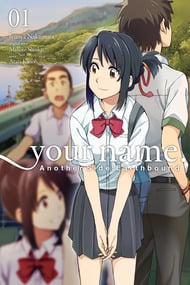 your name. Another Side: Earthbound