Your lie in April - Videos 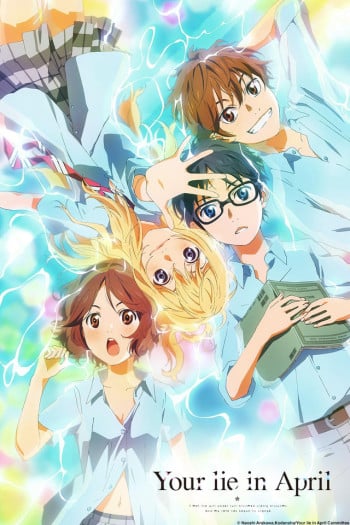 Kaori is recovering from her accident after the performance, and Kousei, Watari, and Tsubaki are starting to realise the new feelings that are brewing in their group.

On the Way Home

The Scenery I Shared With You

Anime-Planet users recommend these anime for fans of Your lie in April. All available to watch right here, right now!

Both anime feature pianists who delve into the mysteries of love and romance, friendship, and motivation for their craft. Kaoru and Kousei shoud have a heart to heart about relationships as they have similar personalties. Sakamichi is jazz while Your Lie in April is classical, but both embrace a unique love of showcasing high quality music.

Music, romance, and the trials of growing up are the main focus of these 2 titles. Both main characters of each show are very similar too.

Your Lie in April and Sakamichi no Apollon have a lot in common. From their focus on an introverted pianist and his group of friends, to the depth of character development, they both vary their tone between lighthearted and darker emotional moments. If you liked either one of these, it's a good bet you'll like the other.

If you liked the romance part of Your Lie in the Summer, it's similar to Golden Time where there's a violent bishoujo that comes into the main character's life but doesn't date the girl right away. They'll eventually fall for each other. It's not about music, but I can see the similarities between the two when I look at the characters and their chemistry. My friend really liked Golden Time as well so I reccommend!

Both of them are romatic anime.

Golden time is a romantic comedy your lie in april is music passion an roamance.  In both of them the scary feeling of loosing someone is present.An other common point would be that there is like a love triangle. Your lie in april is in my opinion much more sentimental than Golden time.

altho they have way diferent plot lines the style of romance is the same and with both of them whenever the two are together you just cant help but smile. (minus the few times that are insanely sad in both of them) but other than those they are both great animes with great plots that are enjoyable to watch.

The feeling between the tragedy of one of them is similar, and how slowly developing romance between them.