Your lie in April: Moments - Recommendations 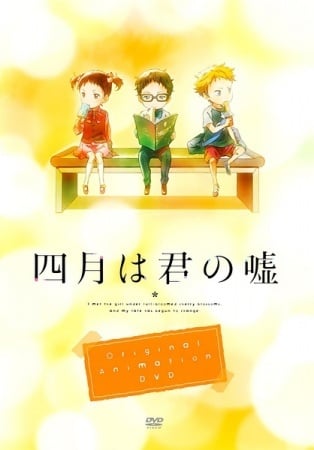 If you're looking for anime similar to Your lie in April: Moments, you might like these titles.

This series is also about music. The story is quite similar except told from a girl's Point of View. Nino, a girl who loves singing, made a childhood promise with her first crush Momo and song-composing Yuzu to someday find her voice. The three went their separate ways, but Nino kept her promise and continued to sing. Years later, the three are now high school students, and Nino is drawn into the world of keionbu or band club.

At first glance these two titles seem entirely different but at heart they are very similar. Both are prequels covering the childhood of the protagonists and cast of their respective universe. As such, these anime are full of allusions to future events, making them great fun for fans by adding an extra layer of depth to what is actually shown.

On top of all this, the protagonists have plenty in common. Arima in Shigatsu as well as Haruka in Starting Days are aloof prodigies in highly competitive fields; music and swimming may have little in common but the way these are explored combines passion and a drive to excel, challenges that form one of the main themes in both titles.

Shigatsu choose to explore members of the secondary cast in this OVA while Starting Days opts for introducing insofar light-novel exclusive characters so that the character dynamics in these particular anime is different from the main works from which they span.

Follow Kumiko as she takes on the role of mentor towards the incoming class of new members of the Kitauji High School concert band club as the group aims to take the gold at the National Championship competition.

Feckless high school student Tatara Fujita wants to be good at something - anything. Unfortunately, he's about as average as a slouchy teen can be. The local bullies know this, and make it a habit to hit him up for cash, but all that changes when the debonair Kaname Sengoku sends them packing. Sengoku's not the neighborhood watch, though. He's a professional ballroom dancer. And once Tatara Fujita gets pulled into the world of the ballroom, his life will never be the same.

Shunichi Domoto is an athletically talented fifth grader, but when Seito Hojoin - a gifted Spinner - utterly defeats him in a simple yo-yo match, Shunichi is determined to have a rematch with his new rival... by signing himself up for the international yo-yo championships!! With only days left to pick up new yo-yo skills, can he master enough techniques to beat the competition?

In the year 2035, virtual reality technology has evolved enough that people can experience world travel and other live event experiences from the comfort of their own home. In this space, idols perform live events for a worldwide audience. As worldwide popularity of idols performing in "VR Rooms" increased, the Kanon Private Academy was established on Beginning Island to train new idols. These idols compete and strive to reach the top of the "World Idol League." Vivi, Kokona, Sena, Miku, Nanami, and Yucho are all working hard to reach that goal.