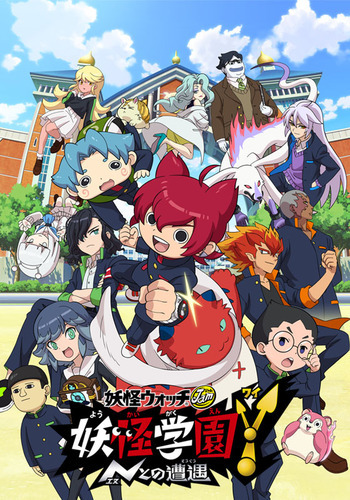 If you're looking for manga similar to Youkai Gakuen Y: N to no Souguu, you might like these titles.

When Akitsu Makoto was a child, he tripped and fell at a shrine and was comforted by a strange being he believes was the god of that shrine. Years later when visiting a festival with his cousin Shou, he sees the god in the crowd and chases him to a shrine to thank him. The god, who is actually a kitsune spirit, tells him that because humans are destroying the environment and the shrines, and no longer believe in him he has lost his power. Jump forward to high school, and Makoto and Sho have inherited abilities as the descendants of the Akitsu clan to communicate and fight with demons and ayakashi.

The local gods are out of followers, and only have one yokai to give them power! Can Mizuchi, the yokai, bring any more into the fold?

A kid inherits his grandfather’s store, which is filled with special items enchanted/possessed with spirits.

Nate Adams is just an average kid until the mysterious Whisper gives him the Yo-kai Watch. Now he can see what others cannot: Yo-kai of all shapes and forms!