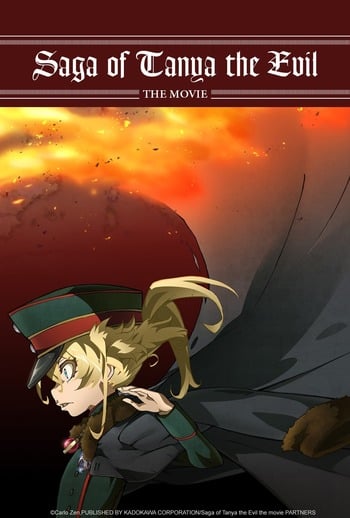 This anime continues to surprise me.  The series itself was good and unique in the way the show got better with every episode.  This movie is more of the same.  Tanya meets her fellow mega magic rival, Mary Sue.  Mary Sue comes off as insane as her screwed up origins.  She wants revenge for a murderous father who invaded a peaceful neighbor and a tried to kill a little girl on a training scouting mission.  If this is supposed to set up for a good guy counterpart to Tanya, it fails miserably.  Good guys don't go starting wars; invading nations; or trying to murder children and if he was supposed to be an ideal loyal soldier? Mary's father fails at that too.  What soldier would become so Ahab obsessed with one opponent who outfought them in battle just to survive?  While the movie was great and had awesome fight scenes especially between the two rivals and secondary between Viktoria and a enemy commander, there were a few things that could have been better.  One of my complaints is with the WWF style posturing during one of the fights to the death.  It was unrealistic and made one of the fighters looks unnecessarily weak to their rival. It kind of defeats rivalry if one has time to flaunt it after their fight without making sure if final victory.  The absence of an appearance by "being x" was noticeable.
The end that foreshadowed another season may have been the best part and once again it's the result of Tanya trying to do one thing but getting sucked into another like the tool of being x acting as a puppet master.  This movie more than the show does give a strong impression of how good her and her elite troops are which really makes the movie shine.  It's sadly realistic albeit somewhat comical how some people see themselves as good such as the allied and federation leaders no matter how much bad they do.  Overall a great movie truly carrying on quite justly the continuing story of Tanya.

I honestly never write reviews but this show and movie is incredibly slept on so I'm doing this in the hope that more ppl see how loved this franchise is (at least by me). I will try and keep the review short and easy to digest ;)

The movie takes place after season 1 and focuses on the federation (Russia) which plans an attack on the empire. This result in Tanya  launching on attack on the capital to create a diversion form the Empires borders.

I really like how the movie was made easy to follow much easier that season 1 in my opinion, also very action packed but left enough room for Tanya to stress her ideologies on how the Empire should capture victory basically  avoiding the mistakes of our own world's counterpart. The only issue I have with the movie's story would be the conclusion of the final fight which i feel could have been do a bit better but behind that it was excellent. The 2hrs honestly flew by and I was left craving for more when the ending credits kicked in.

Studio NUT did an amazing job. I wouldn't pretend to be an animation expert but I have watched alot of anime and this was top class work. My one bad note would be the use of cgi they did twice which was off putting and too be honest unnecessary. Other than that the fights where some of the best in the franchise, THIS says a lot because  Youjo Senki is filled with amazing action sequences.

The background music for the fights uses these deep an intimidating opera vocals that matches the theme of tranny and power beautifully. It is used a lot through out the movie but it never feels over done because it is just too addictive. The sound of the weaponry and battles are very accurate and literally makes you want to cover your ears when the overbearing gunshots sound off.

In this section. The only name I feel worth mention would be Mary Sue, the US soldier out for revenge against Tanya for killing her father. A fair amount of character depth was given to her which is impressive from a movie (take has an onging series), my only bad note is how naive she is, like how can you ask,"why did you kill my dad". When he was a soldier in a war between nations?!!! It would have made sense if he was a factory worker that was a casualty to collateral damage but he was an enemy soldier!!

Other that the small bad point (and i mean really small) I have pointed out. This movie was perfect to me. I hope more people read this an give the franchise a chance you wouldn't regret it believe me ;)