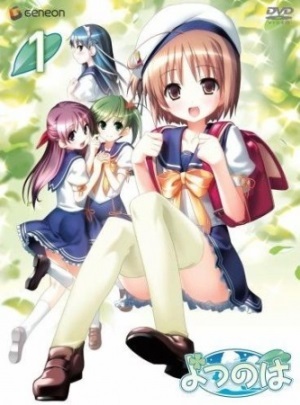 It can withhold a beating of a thousand clichés, weather an onslaught of tripe-loaded characters, and bask in an oblivion of mediocrity no mortal could possibly comprehend. But Will It Blend? That is the question. Cue the catchy music, Tom, because you have finally met your match.

Now, I could jump right in to the customary summary paragraph and kindly explain why this OVA sucks more than a Hoover 10,000 with three motors, but even MacGyver couldn’t pull off a success if handed all Yotsunoha’s crap in a dire situation. To say that it wasted 70 minutes of my life would be cavalier understatement, as the viewing was accompanied by rapid successions of pausing, crying, and bashing of my head on blunt and/or sharp objects. I seriously tried my hardest to pay attention to what was going on, but the only semblance of a plot I garnered from the first episode was “some bullshit with a time capsule.” This same premise of senseless inanity continued well into episode two, and by the end I found myself lapsing in daydreams comparing the time capsule to Pandora’s Box, with the glint of hope at the bottom being a fatal error in the video file or a Windows Blue Screen of Death™. Sadly, no such event occurred, and I stand before you now a weeping and broken man.

Still, in the spirit of fairness, Yotsunoha did have some redeeming parts. Take, for instance, the dramatic guy-chases-girl-to-work-out-relationship-trouble scene. It begins with standard fare, where Loli Girl/Love Interest walks in on the guy (hereby known as Dumbass) during a moment of mistaken debauchery. Ever the gallant knight-in-shining-armor, Dumbass hysterically runs after her to explain, and manages to catch up to her while shouting – in all seriousness – “I came after you…because I was hungry!” He follows up this amazingly touching bit of gentry with an elaborate explanation of how unbearable life would be without her in the kitchen to cook for him, and she predictably swoons in illustrious romantic awe; it is quite a tear-jerking moment, let me tell you. But wait, the excitement does not stop there! Inspired by their new heartwarming bond, the two venture out into the courtyard to dig up their precious time capsule, which causes Dumbass’ balls to drop as he confesses his love by gazing into her eyes and saying “I am not a lolicon!” And they live happily ever after. Pure romantic genius if I have ever seen it. Be sure to take notes, guys; who would have thought the easiest way into a woman’s heart (and pants – there are even sex puns in these scenes!) is to put her on a gleaming stovetop pedestal?

If Yotsunoha did something - anything - right, it was the inclusion of decent scenery, and that really says nothing in this day and age. Despite being dull and unoriginal, the backgrounds look nice, and provide some weak redeeming quality to an otherwise pitiful display of 2008 animation. For instance, frame counts bounce around more than a room packed full of ADD children, and many scenes have characters zipping around at inhuman speeds or moving in jerky motions. Not only this, proportions get messed up in scenes where character models touch one another, facial detail is atrocious, and the color palette struggles to get beyond a handful of shades per character.

Oh, but get this: all the fanservice is done by dialogue! Dumbass talks about how he sees one of the girls' breasts, panties, or whatever other random bout of ecchi humor that is needed at any given time, but none of it is actually shown. Not that I cared, mind you, but it bestowed Yotsunoha  with its own unique brand of retardation. The only, and I repeat the only, reason I could think of someone to watch this would be for fanservice, and it somehow manages to fail even at that. Remarkable.

What do you get when you mix a belt sander, strep throat, and a voice actor? Loli Girl! She summed upYotsunoha's entire character experience, as her God-awful mutterings trumped all else in importance. The music managed to be bland at its finest moments, and none of the other actors were able to voice their characters beyond the level of mediocrity. Though not quite on the level of nails grinding a chalkboard, the entire OVA reeked of audible disaster, and my ears were pleasantly relieved when it was done and over with.

To be aptly generous, the characters were about as deep as a dried up Sahara lake bed, and about as fun to watch as paraplegics playing Twister. Perhaps exemplified by the fact that the OVA had neither a point or a purpose, not a single one of their asinine antics charmed me in the slightest of fashions. Coupled with truly horrendous dialogue, my impressions of them developed in reverse; I liked them most in the opening scene when they refrained from prancing around like wounded reindeer packed full of opium. I really can't think of anything else to say, as their inexorable stupidity has left me completely and utterly speechless.

And there you have it - a true tinge of brilliance! I strongly recommend Yotsunoha  to anyone and everyone with an IQ below ten. For all others still considering its potential watchable merits, might I instead recommend Olympic diving into a vat of boiling oil? It would be just as painful, equally as stupid, yet worlds more entertaining, and believe me when I say entertainment is something you'll be desperately pleading for after suffering through such an awful viewing experience.

Plot: "Makoto Yuki, Nono Nekomiya, Iori Yuzuki and Matsuri Amachi were close friends – until their school closed down. Each would be transferred to a new school, so before the friends parted ways they buried a time capsule under a tree on the grounds of their old school and promise to meet there in three years. Time goes by, and after three years without contact they return to the school, only to find that the contents of the time capsule have been hidden by an old teacher of theirs! While searching the school for clues, memories of their time together begin to surface, and old feelings are reawakened..." (site synopsis)

Story: To be honest, i did not have much expectation regarding Yotsunoha but still i thought that it might not be such a waste of time, in some ways there wasnt.I found it enjoyable, with a nice and funny comedy aspect, with a lil bit of romance, warm type, a tipical school life anime, classic type.The story of this anime revolves around four main protagonists, Makoto Yuki, Nono Nekomiya, Iori Yuzuki (Makoto's sister) and Matsuri Amachi.This four were close friends, more exactly childhood friends until the day their school closed down and they part ways, transfering to different schools.Even so they did not kept in touch with eachother for three long years, until the day they finaly get to meet eachother again.Before they parted ways, they buried a "time capsule" under a tree on the grounds of their old school, promising that they will return after three years to the same place so they can unburry the "time capsule" to see what everyone placed inside (each of them placed one of their precious things).After three years they suddenly meet at the school grounds again, without contact for three years.They started to unburry the "time capsule" at the same place where they placed it but they found out that the contents of the time capsule were hidden by an old teacher.As they search for clues with the purpose of finding the "time capsule" memories of the time they spent toghether begin to surface, and also some old feelings were reawakened.Well from the site synopsis and also from what i described here, there is a more then possible couple.The story of this anime seemed pretty simple, nothing out of common, nothing that would attract my atention, i found it enjoyable and relaxing, the only thing is that it was too short.After searching for some information related to this anime, i was kinda

Animation: In terms of animation i also have to say that its nothing impressing, a classic, usual, tipical type of animation, which we see in like 50% of the animes.The character designs is what i realy liked though, Nono a cute loli, always kawaii and always childish her design realy fits her personality. Enjoyable and not so bad, even though i cant say that the OSTs are great, the ending and opening are decent but not something that is listenable, when i say that is decent it means that it fits the anime environment.

Characters: Related to characters, this anime has no character development at all.We start with the same characters that i mentioned above and we end with the same, no other characters interfere in the story.Individualy as well they werent developed quite well, we only knew that this four characters were related, they were childhood friends and they studied at the same school, nothing more.One thing that i liked is how Nono kept calling Makoto "Ma-kun" all the she calls him like that she looks so cute, makes you hug the screen.

Overall: Enjoyable, warm, nice and funny Yotsunoha is something that really makes you smile.I wish that it was abit longer, bet that if it was it would have been even better but still i enjoyed it to the fullest even though it was so short.I recommend this anime to everyone tha enjoys a nice, funny and warm romantic comedy.

~As always just my thoughts~

SPECIFICS
The story is based on an eroge, so all the fuss is just which one of the four bishojos will hook up with the yasashi male protagonist. There is nothing original or even remotely perplexing about the story; it is only two episodes of non-sex romance with erotic innuendo. We simply see about a dozen scenes where the girls meet with the boy, important events that led to liking him (out of the blue as usual) and the final choice he makes amongst them (although it is pretty obvious who that would be, as one of the girls takes up half of the total duration). It is a simple story about simple characters. At least the story is not linear; it consists of several flashbacks that happen when they should and explain how and things are as they are. Plus, the characters are acting funny half the time and turn the series into light ecchi/romance.

Half the fun in eroge is the awesome graphics and the absorbing atmosphere. This adaptation does a fine job giving you the feeling that everything in the world is a happy place, where pretty chicks can like the average Joe. Moe, kawai and all other terms you can think of are present. Half the scenes are practically fetish situations in school grounds (such as pool with swimsuits or party with cosplay). Leaving that aside, colors, details and music themes are building atmosphere and are on par with modern series. They are likable but hardly epic in any way. Also be warned that one of the girls is a loli and the whole premise is not that innocent… Crazy Japs!