Yosuga no Sora: In Solitude, Where We Are Least Alone 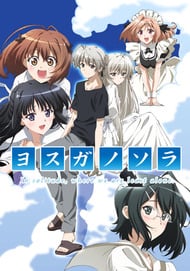 After losing their parents, twins Haruka and Sora travel to the countryside to start a new life. The two soon meet new friends in the shrine maiden Akira, wealthy Kazuha and well-endowed Nao, amongst others. As the days go by, Haruka learns more and more about the new ladies in his life, all the while being a patient confidante and good friend, leading him into their hearts, as well as their loins. Meanwhile, Sora can't help but have a recurring memory of her brother kissing her as a child… 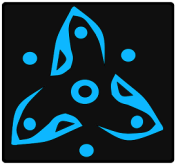 you see a lot of people call this anime out on being a hentai with a sh*ty story to go with it; of course there is always that taboo problem with incest that turns people off.*showing to a friend of mine, first episode, everything going good until...*"ewww! they kissed that's nasty! they're siblings! what are you showing me?!"i might feel this way because i don't have any sibling and could just "not understand" the nasty-ness here. BUT i will say that regardless on your opinion on incest, it makes one hell of a romance drama! i liked this anime, i liked it a lot; as much as people will think i watch it to "get off" i can honestly say *though of course there are some hottish scenes* that YES i did infact watch it for the story >.>now that i am on the topic of the story, lets talk about it some... simply i'll just say i liked it, i don't think it's necessary to get into the whole emotional/romance/psychological thing so i will skip straight to my complaints about it. my big complaint was how there are plenty of separate time-lines in the show. * basically, sense this has roots in visual novels, each time frame is about how haru gets with each girl* so there will be some story, then wham!: back to the end of episode 2 where it shows a sort of "what would have happen IF" ...the story i liked the most was the sora arc, yeah that's right, the incestuous story. if you feel like taking my word for it the sora timeline takes place with episodes "1,7,10,11,12" but if you're guna watch it i would suggest just watching the whole thing. its not all phenomenal but is all watchable.one last note before i end the review; the soundtrack is wonderful! if i remember right there were a few tracks i thought were weird, but most of it is very pretty. there is a particular track i remember loving *track 5 on the ANIME ost; the vn ost is pretty back* that uses "i think" a steel string guitar, piano, and violin. if you never watch the anime i still suggest listening to this song ^.^ i also think it represents the anime pretty well so i will link it *regarding i can link things in reviews, have never tried before o.O* -http://www.youtube.com/watch?v=Gy95lu5WaPg

The general story revolves around a pair of sibilings that have returned to a small village they once lived in when they were younger, however not on the best of circumstances. Despite this Haruka finds himself easily making life long friends whilst his sister Sora finds it a touch more difficult to come out of her shell. Now. This is above all a great romance, I cannot stress this enough. Do not let the tags or other reviews deter you from missing out on this great anime.  *SPOILERS* In episodes 1-3 of the series the story focuses on the romance between Haruka and one of his classmates Kazuha. She is a brilliant violinist, with some family difficulties that Haruka helps her work through. These first few episodes are raw, and emoitonal.....indeed the rest of the shows tone and atmospher is set and crafted by these beginning episodes. Its worth mentioning that the constant motif of Sora's dream in which her and Haruka kissed as children is brought to the attention of the viewer In episodes 4-6 Haruka begins a romance with another one of his friends which he knew as a child. she's a traditional shrine maiden and her name is Akira. Much like Kazuha she too has a littany of problems, but Haruka helps her push through and break down her hym- i mean door to her heart In episodes 7-9 Haruka's friend and previous predator Nao, begin a romance despite her having taken advantage and raped him when they were children. Unfortuantely Sora becomes particularly hostile and jealous of this relationship. As not only did she see her brother get raped but she also wants to be held in the same way Haruka is holding the other girls in the village. NOW - Episodes 10-12 can be considered the crescendo of this amazing series. Due to events that I won't go into at length Haruka begins to notice Sora, as more then just his sister. The two are awkward at first but realise theres something primal and chemical in the works that can't keep them apart. In summary, they have sex. Like seriously they have sex everywhere, like Nao his previous girlfriend walks in on them having sex. I won't spoil the ending but lets just say it ends in a climax ;) P.S the music is hauntingly beautiful and fits the tone of this masterpiece perfectly. Overall - this is NOT a hentai. Its a loving story between siblings, that just happens to be technichally immoral or disturbing (to some people). If you're too closed minded I suggest you watch something vapid and mindless like Hellsing or its horrible sequel Hellsing Ultimate (please see my review). 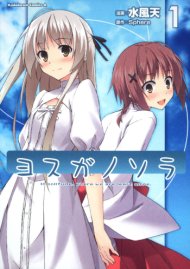