Yona of the Dawn - Reviews 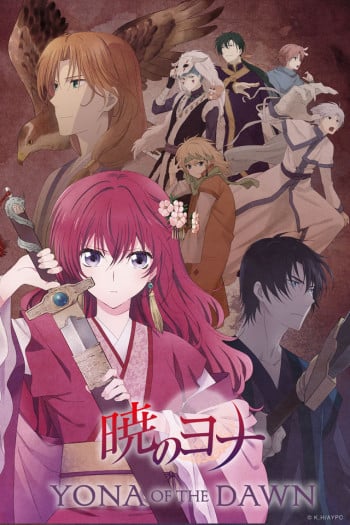 Yona is 15 year old Princess who is pretty spoilt and clueless. Her two best friends are her cousin Soo-Won who is sweet and gentle,and who she dreams of marrying and Hak, would be leader of the wind tribe. The monarchy is supported by several tribes, the Wind among them. Hak takes on the role of the Princess's minder at the Kings' request and is powerful and strong, but appears to take no interested in either being the Princess's protector or leader of the Wind tribe.

The King the younger of two brothers was surprisingly given the throne instead of his brave and talented brother (Soo-Won's father), but accepts the decision gracefully and supports his brother, the King, but later dies in battle. The King on the other hand is gentle and hates weapons and fighting.

On Yona's 16th birthday Soo-Won arrives for the birthday celebrations and gives her a hair clip that matches her red hair. Her father also forbids her from marrying Soo-Won. That evening she goes to her father's quarters to persuade him to change his mind, to find Soo-Won murdering her father. He then orders her death but is rescued by Hak. During this time it is discovered that Soo-Won's father was murdered by the King, which is something he has carried since childhood and has since wished for revenge. After the murder he is crowned King.

Yona and Hak escape and from here the story really begins.

There is a reason why these types of animes are made time and time again. Simply because we love them. It's the typical journey of a young woman, finding her strength alongside beautiful, strong and brave young men. With enemies that can be hated and loved at the same time and are incidently also beautiful, of course then there are also the enemies that are so evil that you absolutely want to see their defeat, but manage to evade justice time and time again. I can tell from the outset, that this is one of those animes. Girls love them, we are still dreaming of the fairy tale. I imagine this is one of those stories that could continue beyond 100 episodes.

So with that, there are no surprises here, it is exactly what is written on the tin and I wouldn't change a thing.

Really good. No irritating female voices so far, and I hope it stays that way

Great characters, lots of personality, with plenty of room for growth and back stories.

It should be great and I'm really looking forward to it.

I'm not done watching this but i think im honestly going to drop this. Its like soooo cliché really. Im reading reviews and they say the story is 10/10 like um no lol? The story feels rushed and the main character,to me of course cause this is my review , is annoying and not really main character-ish or whatever that means . I mean yona is so dumb like shes that one person who will stab you in the back and ask why are you bleeding. Omg and the chibi stuff they do like every episode its unnecessary!! You know what im talking bout right? How like when they have a colorful background and the characters go all chibi and start fusing at each other or something(i would post pic but im on mobile) well they do that in unappropriete situations which makes it unfunny and kind of awkward. The background story of the dragons are silly. Like im at the blue dragon part , almost done with it and  his story sucks its so boring and i never been intrigued watching this anime. You can expect whats going to happen after like 10 episodes or so. Well thats if youre smart i guess. Take this crap off your watching list and want to watch and watched and erase this sh*t from your memory cause its BAD . But im still gonna finish it though...

The story is AMAZING but i was let down when they finaly reach there goal and then the animated version ended. Im reading the rest of the manga but really would have liked the whole thing to be animated. But over all I really loved this anime it have a nice plot and the classic Reverse Harem element (Shoujo and Harem). The Characters are all unique and I love all of them. Animation is beautiful and I recomend it. 10 out of 10 would watch again.

What would you do if you lost everything due to the actions of the one you thought you loved most? Akatsuki no Yona is an anime about a princess named Yona who has lived a very sheltered life and who suddenly has her world completely ripped asunder when the man she believed herself in love with, Soo Won, assassinates her father, forcing her to flee the castle with her childhood friend and protecter Son Hak.

While running for their lives the two stumble upon a priest who tells Yona that if she and Hak want to survive they must track down the four dragons of legend to protect them. See, the kingdom of Kouka was originally founded more than 1000 years before by the legendary King Hiryuu who was said to have been a dragon who descended from the skies and fell in love with humans ... becoming human himself. He was said to have been so loved by the other dragons that four others granted four humans their powers and charged them with protecting the king. The king was eventually betrayed by the humans that he had come to love and he was killed. The four dragons scattered throughout the kingdom and over time many began to think of the legend as not more than a story of fiction. Yona and Hak set out to find these dragons and that is where the story really begins.

What I truly love about this anime is the character development. Each character (save Zeno who shows up in the last episode) is masterfully built and you can't help but feel for them. Even Soo Won. I wanted to hate him ... I really did ... but you come to learn that he had an actual reason for doing what he did. And he struggled with his decision, it hadn't been easy for him to choose to do what he did. But now he has to suffer with the consequences of his actions ... and that made me really sad for him.

With it's addicting plot, beautiful animation, gorgeous soundtrack, and fantastic character development is it any wonder that this anime became my favorite? No, really, it's my favorite anime now ... that's how much I love it! I really hope they do another season of the anime because the manga gets even better from here! I highly recommend Akatsuki no Yona!

I heard about this anime few months ago, but I was avoiding it. Three weeks ago I finally gave it a go and I'm so glad I did. I absolutely love it. At first, I was avoiding it because it didn't sound interesting...one girl with males on journey. But story is great, characters are amazing and Yona's developments is great. I'm also looking forward to see her fall in love with Hak, who loves her and understands her more than anyone.