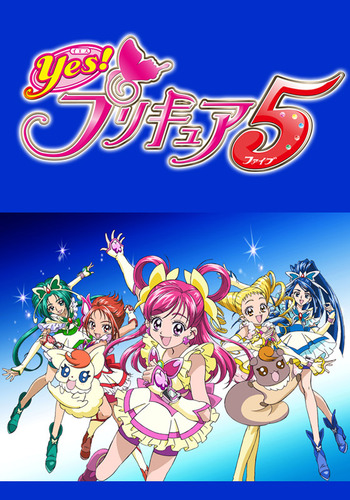 The 4th season of Pretty Cure and it was better than the last 3 season. We have the Palmier Kingdom that was taking away from the infamous group called Nightmare. With their kingdom in a million pieces, the Prince Coco goes to Earth to find the legendary warriors, which of course is the Pretty Cures. The Pretty Cures are forced to find the 55 pinkies that the wish of Dream Collecter will be granted to the user.

The things that I enjoyed are the two mascots and how they can become human-form and Fairy - Form. The 3 seasons has been the love connects between the fairies. I enjoyed that there aren't 5 fairies all together and that they are not required to morph with fairies. I love the theme of the Pretty Cure and the villainous group. I like how the groups are related to nature of butterflies. The characters feel like a sentai group together. The Sentai felt makes enjoyable.

A couple things I dislike were the costumes, to be honest. Butterflies are colorful and these costumes are not that. I hope the next season we get more color on the suits. A problem I personally feel is that the pretty cure needs more magic powers just because it makes more fun and worth it. I recommend this for beginners of the magic girl genre.

I am not writing this review of Yes! Precure 5 because of the sparkling plot structure and idealized characterization.  It is rather a tedious presentation with predictable endings and no real twists to the storyline.  I cite this series as an important trend setter which would send Toei Animation into a historic, permanent shift in the Pretty Cure mega-series.  Transitioning from small teams of two or three to larger ensembles of five (later six in the second season) would lead to the re-invention of magical girl concepts.  But this brave new age of Precure would not usher in a time of magnificently crafted literary plot. Yes! was more a random gathering of stories about this girl and that gal joining a glib little squad of legendary warriors who moseyed onward toward a non-descript goal of saving the day for a nation of cute and cuddly fairy-type critters.

For the record, here is my list (IMHO) of best Pretty Cure storylines:

5.MahoTsukai Precure.  The saga of the legendary warriors with a touch of magic.  Born in different realms, Murai and Riko combine a love for magic and adventure to find an unbreakable bond of friendship that normal divisions of background and culture cannot separate.  Battling the enemies of dark magic and mugic to save their realms it comes about that this victory means the Magical and Mundane Realms must forever part.  But …

Enough of excellent plotlines.  Back to Yes! Precure 5.  Again, its importance is not in the story, but in the thrust of new directions.  Here are Yes! five key contributions to the Precure franchise:

Good achievements for a Precure series.  But the plot?  Yikes!  It rambled about around a goal of a promised restoration of the Palmier Kingdom of Coco and Nuts (hey! I don’t name ‘em, just report em).  Nozomi et. al. must gather 55 pinkies (never saw it happen ... it was suddenly just over).  The Dream Collet is the only hope for having the dream fulfilled but it is sought by Nightmare.  The evil organization gains the Collet and uses it, but the dream of the Palmier Kingdom restored is still accomplished, though at personal sacrifice of the Pretty Cures’ powers.  Butterflies form the theme and all the villains transform into the enemies of order Lepidoptera.  The action is disjointed and is mercifully over at episode 49.

Wait!  There’s something called Yes! Precure Five GoGo?  And that this series and Kirakira Precure ala Mode is all that is left in my odyssey of the Precure universe?  Let’s plow on!