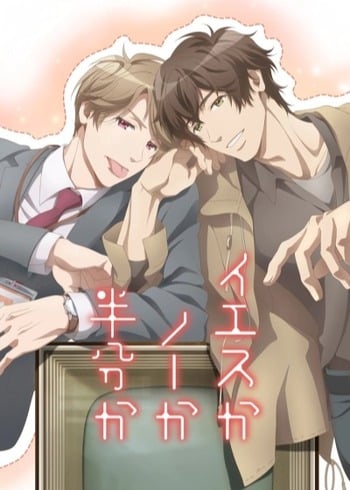 It was very cute and promising in the beginning and the concept was kind of interesting, but it then just moved too quickly and the last few minutes made me hate that brown-haired dude so much. SPOILERS(?) the things he said gave off so many red flags and the sex scene was so rapey. The blonde dude literally said to stop at least 5 times.

This was a pretty solid storyline and until the last few minutes of the movie, I really enjoyed the characters. If you don't like BL this story is honestly probably not worth watching, especially with the final scene being a very fine line between extreme pressure to have sex and sexual assault (much more closely leaning towards the latter), which made me dislike Tsuzuki (of course I still liked Kuneida just as much, but he was a little annoying) a bit where I'd previously really liked him. Of course, this is, unfortunately, a common theme in BL and alas is something you must expect or at least be aware that you might come across.

Completely ignoring that "love scene" that was not very lovely beyond the animation... This was really good for a BL lover. It's really hard to find BL with good animation and good looking characters, but this anime certainly did that perfectly. I didn't think the story was anything insanely special but it still kept me entertained and I really liked the way that the tension between the two characters. The story being focused on the news world was a very original idea.

Overall, the last scene did upset me a bit but besides that they had a cute relationship. But I really wish that the story didn't include that stupid scene because the story did not need it and would have been way better without that.

But definitely watch if you're a BL fan, it is good for that.

Forgive me for making any spelling errors or just blantly disregarding anything, I do like to speak my mind about things and mean no harm to anyone who loves this anime, I just have my own words for it. Also, i'm still new to this website and writing reviews. However, the more I have a thought on an anime, the more longer my review is. So just a heads up!

I love my bl/yaoi or however you call it, I'm still expanding on this but I have read a few good manga or manhwa of it plus animes. All in all I'm a fan of it for sure and when I saw this movie going everywhere from tiktok to instagram and even here to see the good ratings. I decided to check it out after finally finding it and here is my review:

Like every bl/yaoi the most important thing is how we are introducted to either one of the characters or just one of them. We get introducted to one of our main characters, and his two personalities. They don't bring much relationship into it or even life struggles, it is all very smooth with only small topics. Usually in bl/yaoi animes they sometimes have such a big reason as to why each character does what they do however in this movie everything takes its time. Nothing feels rushed and it's enough to make you remember everything that happened from the beginning of the movie. I love my pacing in anime and how it goes with the story, they did not rush anything and did not leave anything hanging so everything gets answered especially with the confession + kiss.

Personally I loved the animation, it still had the light novel/bl feeling of a yaoi plus with the ending scenes they mixed together the bl and yaoi. (as in the cute light soft parts with the sexy sensual parts) I can't say much because I do think it was very nice animation to see and most parts I didn't find cringey or just a little off at all!

ALRIGHT- so before anyting I must say. During the ending scenes when they are having sex there is a part where Kunieda either hiccups or burps while saying the other guys name. At first it took me be surprise and got a giggle out of me but I think it was sweet. Whether it was on purpose or on accident it's nice because it could happen while having sex in real life plus it adds to Kunieda's cuteness in my eyes. The sound was very nice and went along with the story which I also look out for, but voice acting in particular I think it was also well done. Nothing sounded out of the ordinary and the va's went with the characters to, along with the sex scenes nothing just seemed weird or caused you to laugh. Unless you are like me who just giggles and laughs during bl/yaois, but sound was excellent!

Of course it's a movie so we can't see alot of characters which I can understand and if they did add anymore characters then people would get suspicous of them as a home wrecker as some people call it. The characters all acting like they were supposed to and there stories weren't confusing or difficult to solve, it actually all fit together especially with the ending scenes and confession, it all comes together as a whole.

I hope they make a second movie! At the very ending after credits we see two new characters such as Asua (Apologies if that is wrong) and a man with orange hair whose name I forgot. But I hope weget a second movie, I do enjoy everything about this movie especially with the little notebook doodle scene. I thought it was adorable and I loved how it had such a good example of both bl and yaoi, how it mixed together and how bls/yaois don't always start with sex or how sex is such an important part of it. Overall a 9.5 cause I thought it was a very sweet movie and makes me feel whole. But also half because damn 2d people get better relationships than me.

The overall idea of the anime is nice, but the plot and the delivery was very lacking. The main characters' random monologues felt very weird and unnatural, I'm guessing they were used to fill the plot holes. The sex scene at the end threw me off. I wouldn't recommend this movie, unless you're really bored and have nothing else to do/watch, tbh.

Honestly this is probably one of my favorite movies/anime ever!!

I really liked how it isn't one of those animes that literally don't even tell a story and it is just full on confusing.

I absolutly LOVED the Movie, exept for the last few minutes of the movie.

I think that the script writer did a good job on not making this so cringy!