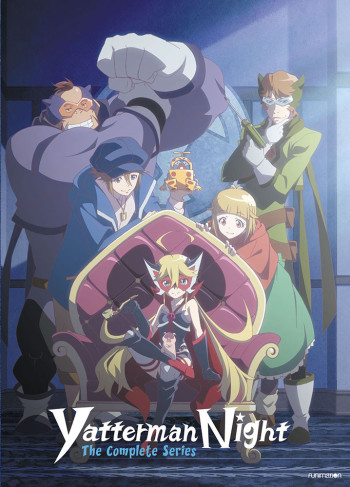 Several years after Nadia and Jean went on a grand adventure together and thwarted evil, Nadia works as a writer for a London-based newspaper. In the midst of writing her memoirs she receives a big scoop: people in high positions are literally vanishing into thin air. Upon investigating, Nadia discovers that these events are part of a worldwide conspiracy to replace the planet’s leaders with robots, in order to start a war. Meanwhile, in France, Jean finds a girl named Fuzzy washed up on the shore – a girl who is being used in the conspiracy. Soon, Jean and Nadia have combined forces to save Earth – the robots must be stopped!

It was just a juvenile search for adventure that brought young mystic Nakahito face to face with the android mega-weapon, Kurumi. With just a kiss, she is activated and answers only to him. Now they embark on a comedic journey that will carry them across Japan to discover the secrets of the Steel Angels and how such technology has come to exist before the advent of television. In their travels they will encounter spies, army agents and rogue Steel Angels but the real discoveries lie in the heart of a young teen and the miracle he has awakened with a kiss.

Robin was raised by his father’s six robots. He and the robots battle against invaders from the Planet Palta, to save his parents and save the earth.

In the year 2050, a violent earthquake on the moon spontaneously changed the moon’s atmosphere and gravity, making it habitable for humans to live upon. Fifty years later, the young Daichi Haruka heads to the moon for summer vacation; he wants to try out his newly created Jetboard, but he wants even more to catch a glimpse of the rabbit person recently spotted in the desert. After running across a little girl with furry ears and her like-bodied grandmother V-May, Daichi finds himself in the middle of a grand adventure! With the help of the giant mecha Granzort, his new companions and two other children, Daichi will help put a stop to an evil monster race that is dead set on controlling the universe!

Ozu Hideo is an editor in the porn industry, but wants to be a movie director more than anything. His whole life, he's been recording his masterpiece production: The Life of Mai. After a meeting with Mai, who he hasn't seen in several years, he is left without his life's work and a broken heart. He awakens from a night of drinking away his sorrows to an apartment full of 3 cyber-maids. Now, with the help of these technologically advanced girls from the future, he will try his hardest to finish his movie about Mai and become the director he's always wanted to be.

To save the galaxy from impending doom, Cacao and Parfait are sent on a mission through time and space to retrieve the Fourth Warrior, Lamunes. Unfortu- nately, Cacao and Parfait discover Lamunes at the helm of the marauding Giga Genos invasion fleet. World by world, Lamunes is determined to bring the entire galaxy under his tyrannical heel. With the helpof a plucky orphan, it’s up to Cacao and Parfait to stop Lamunes from taking over the world.