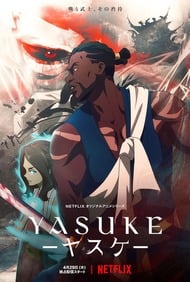 As some people may be familiar with, LeSean Thomas worked on a past anime for Netflix, which was Cannon Busters. But Cannon Busters felt like one of those series where the creator is just taking a bunch of ideas and pouring them into a show. And the outcome was meh at best, but surely the creator learned with his mistakes and did better with Yasuke, right? Nope, if anything this was a worse experience than Cannon Busters. SPOILERS WARNING since this review will be covering the entire anime: Story- The story begins with former samurai Yasuke being asked by Ichika to escort her daughter to a doctor because of how she is suffering from her powers. And that is the first major stumbling block of the Yasuke anime. The writer(s) never establish what Saki's powers are or explain the power system in Yasuke. Power systems are a big deal to me since I grew up with shounens, and they add to the balance and structure of the story. In Yasuke however, magic does whatever the creator wants it to do. I don't like using the term asspull, but it perfectly describes how the majority of fights and problems are solved in Yasuke. Such as the fight with the priest, where Yasuke breaks free easily after receiving an ass-whupping. Or Saki just comes out of nowhere to remove Mitsuhide's dark magic power-up. And also where Saki just goes super butterfly on the Daimyo.(I swear the author must have gotten that from Naruto.) The biggest one is where Saki resurrects Yasuke from being dead, while she's crying if I may add. This reminds me of the scene from the first Pokemon movie where Ash dies and is brought back to life. And while that movie doesn't have the best writing, the build up and the music did add to the scene. Yasuke's resurrection on the other hand I felt nothing. And I think that has to do with there being no chemistry between Yasuke and Saki. But I'll touch more on that. Animation- The animation, when its not involving a fight scene, is average mostly. Even then, the fights are fine for what they are. But they are otherwise forgettable. But then again, Mappa was juggling a lot of anime works, so can you really blame them? Sound- While I may not be super familiar with Flying Lotus, he did create the opening and the OSTs. Some people may argue that they don't fit the time period of the show, but you know what else didn't fit in the show? Mechas. The creator really went all out, for better or for worse. So yes, I do like the soundtracks, since its one of the parts of the anime where I felt the most effort was put in. Characters- If I had to be brutally honest, every other character besides the protagonist sucked. They're all stereotypes that have been seen in other anime. Abraham feels like a scoffed version of Anderson from Hellsing Ultimate. And with Kurosaka, we already have a badass demonic female swordman in the form of Teresa from Claymore. Hell, I'll toss in all the female arrancars from Bleach, simply because they leave a longer impression than Kurosaka. Have I talked about the Daimyo, cause I haven't. Daimyo is the name of a position in old-era Japan, and yet its this character's actual name. She looks like a scoffed version of Silene from Devilman. Other than having a thirst for power, that's all that sums up her character. As with Yasuke and Saki, there's just something half-baked about this relationship. It could be that their voice actors sounded inexperienced with voice acting. Or it could be out of obligation, since Yasuke seeks redemption after killing his master. So helping Saki could be a form of atonement. The creator could have developed their arc a lot, maybe aiming for that father and daughter relationship that Ellie and Joel had in The Last of Us. The creator did say he was influenced by Lone Wolf and Cub, so it could have happened. Except that there were only 6 episodes in the season. And Saki, when she's not being an annoyance(since there's nothing endearing about her), provides solutions in the story when the creator demands it. That's not a character, that's a plot device. If there's one positive I will say, at least Yasuke doesn't feel like an asshole compared to the protagonist of Cannon Busters. But at the same time it feels like wasted potential. Overall- I did not like this anime a lot. Everything that it attempted to do has been done better already. There were two things I liked about this anime though. The contorted body death scene that happened to one of the mercenaries(episode 5), that was well animated. And Johnny Bosch voicing a fat samurai in episode 4, that was amazing. But I think the problem is that LeSean Thomas is not good at writing action-adventure anime. He just isn't at that level quite yet. However, he is good at doing comedy-dramas, since he did work on the first two seasons of Boondocks. That's something worth checking out if you're depressed from sitting through this anime like I am.

Well what to say  This show was a pile of interesting ideas, the potential for great story and presentation of historical happenings buttt, everything went south really fast Spoilers ahead The story is one huge recap slash speed deal mix kinda thing Let me explain:  Firstly, the whole show is seen from the perspective of Yasuke who remembers his past as a general of Oda Nobunaga and lives a quiet life as a fisherman somewhere nowhere in feudal Japan. This is already a waste of potential and storytelling as everything that could be interesting about the show went to waste, it was too fast and too messy. Yasuke remained a very shallow character overall  Secondly, they introduced robots, mutants, isekai level magic powers in a story about a historical figure and his life in feudal Japan, like wtf were they thinking  The girl called Saki that ended up teaming up with Yasuke later on went from very ill in the first 2 episodes to walking around destroying every bad guy coming her way with insane magical powers that she learned to control in less than a day in the show and 5 min in the episode Lastly, the show was enjoyable to some point as even if it was a total mess it had great animation and fighting sequences as well good voice acting (in some characters). My advice is that you watch the fighting sequences and maybe if interesting in historical stuff the moments of Yasuke's remembering moments  Such a shame what they presented, did, and wasted time on  to what they could have achieved, presented and showed