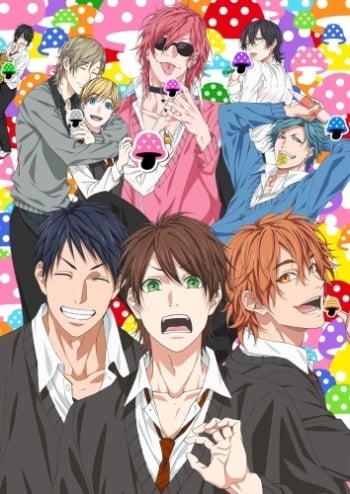 As someone following the mange I thought this was a nice little adaptation of the first few manga chapters. For those who have read some of the manga I think you will enjoy it, for those just watching the anime it may feel a little scattered (the episode is split into different scenes or skits) but it's still a fun watch.

I give it a 07/10 because it felt unfinished. They shouldn't have left off on such a massive cliffhanger. It had really good animation and a pretty decent story line.

I'm sorry, but why does this anime have such high ratings? I contemplated dropping it so many times while watching it.

The only reason I actually managed to watch all two episodes was because of the pairings and the main song (very catchy, one of my favourite songs, but that isn't the point). It was specifically the main pairing, Kashima and Toono, that fascinated me. They seemed to have a healthy relationship building up, which was surprising considering the amount of shit in this god-awful yaoi.

My main problem with this anime was the fact that they glorified some really horrible topics such as child prostitution, rape and pedophillia. The entire anime is literally about a high school club where boys aged 15-18 provide sexual service to their classmates AND EVEN OTHER TEACHERS. ONE OF THE CLUB RULES IS LITERALLY IF THEY DON'T HAVE SEX FOR MORE THAN A MONTH, THEY HAVE A GANG BANG (that is implied to be forced). ARE YOU KIDDING ME??

Look, I'm not one of those kind of people who say that yaoi is homophobic, I'd say I'm the opposite of that. I think that yaoi is perfectly fine, and does not feitishize any gay men, I have a very strong opinion on that. But this? This was just a mess. And the sad thing is that it is a popular yaoi anime, so it just gives a horrendous view on yaoi. When the anti-yaoi people see shit like this, this is why they think yaoi is bad. They see rape and pedophillia and child prostitution being fetished, and understandably build a negative opinion on other yaoi because of it.

The first explicit anime of mine to watch and I wasn't disappointed. Aside from it being discontinued, of course. I would've loved to keep watching it. The story has a lot going for it. It's moved me to want to read the manga, which will coincidentally be my first manga as well.

Nothing much to say on this one because I only have 2 episodes to go off of, but it's a great start. 9/10.