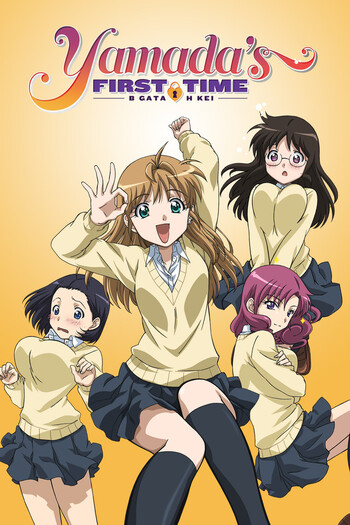 B Gata H Kei is an anime that does not get enough credit and notoriety for what it is...which is one absolutely hilarious Ecchi anime!

Story: 15-year old Yamada is obsessed with having sex with 100 guys, that's right 100, before graduating from high school. Why exactly!? Who the heck knows! That's what this story is supposed to be primarily about, which doesn't sound too promising. To be honest, it isn't.

Nothing about that screamed "riveting" to me when I first heard it. However, five minutes into the very first episode, it was already laugh-out-loud funny. After the entirety of the episode, you realize that the show was exactly what it claims to be, but not in any way I would've expected. It truly isn't all that distasteful, vulgar, or offensive and it was not an anime that takes itself seriously. I came to realize quickly that all the ecchi elements were there to support the heavy comedic aspects of the plot. Thank goodness for that!

Animation: As a whole, the art had a pleasantly bright and colorful palette. Contrast was good in the very few scenes where it existed and was truly needed. The characters, while not overly detailed, were detailed enough to make their on-screen presence visually appealing. The animation itself was smooth and consistent throughout most of the series. There were a few spots where the animators got lazy in character movements, which I didn't mind too much. After all, it's a Comedy and not some action-adventure type series where that could've been problematic.

Sound: First of all, the English dubbed version is a must! I'll explain in the Characters section.

Second, there's not much to say about the soundtrack. It's your standard fair that I would expect from this genre of anime. The OP and ED are solid though, if not just a little above average. I could listen to them before and after every episode without feeling an urgency to skip them. It means they're tolerable at the very least.

Characters: This is where the anime shines the most. The writers did a fantastic job at capturing the show's lewd, mature nature and turning it into something hilarious. The English VA's did an equally impressive job at bringing the script to life. You could tell that they all had fun with this one in both writing and acting.

Yamada lives in her own world! She is without a doubt the horniest anime character every written! She is lewd, has no shame, is blunt, and has absolutely no clue to what the heck she is doing regarding sex! Yet, she talks it up like she's a mountain of knowledge and has nothing but great ideas. Her mouth and behavior are both quite funny and very entertaining. And although she has a Big Ego, she also has a much bigger heart and is a better person than you might think at first. Her counterpart, Takashi Kosuda, is a bit on the weaker side of characters, which actually works for him in this series. He and Yamada are an excellent Odd Couple-like tandem. They balance each other very well.

Other key characters of note include Yamada's best friend, the F-cup Miharu Takeshita (Yamada loves giving her a difficult time about her breasts size), her sex deity Erogamisama, and her arch nemesis Kyouka Kanejou.

Overall: B Gata H Kei is a riot of laughter more often than not. At the time of this review I have seen it three times, and I'm confident that I will watch it again, for the laughter if nothing else.

The anime's biggest downfalls are the lack of at least some type of quality plot and the anime's short comings. A few of the other characters don't get enough screen time and their individual stories aren't brought to life enough due to the limited 12 episode length. Still, it is hard not recommend this show if you bare everything in mind that you just read in this review.

Absolutely hilarious, I had a permanent smile on my face the entire series. A really mellow story and all of the characters were quite diverse and likeable. A bit of a role reversal from the usual loser male trying to lose his virginity, which I really enjoyed.

Definitely worth a watch!

Ok this is rather an odd anime especialy just for a normal girl, but hey who cant relate to how it feels when you think your ready to do it lol.

its not as bad as the description makes it sound.

it is a very cute and rather silly romance. the characters are adorable with great personalities and humer. i cant even tell you how often i laughed while watchig it.

its a must see!

Im not a very experienced anime watcher yet. i started wathing some on netflix and this is one of the shows i came across. at first i was like well then.. but i got really hooked on it and when i realized there was no season two i was kinda deppressed about it. i personally loved this show.

I decided to give this anime a chance, because it was in one of the reccomended in another anime I was watching. Not only did this actually surpass my love for the previous anime. Its not like alot of other titles where there are drawn out sexual situations that start to make the anime feel like hentai, All sexual situations are followed by comic relief, lifting that awkwardness up. I really enjoy the dynamic of this as well, Yamada and her friend, as well as Kosuda and his friends. I would reccomend this anime to anyone who loves the comedy anime genre, even if you're not into ecchi.