Yamada-kun and the Seven Witches - Videos 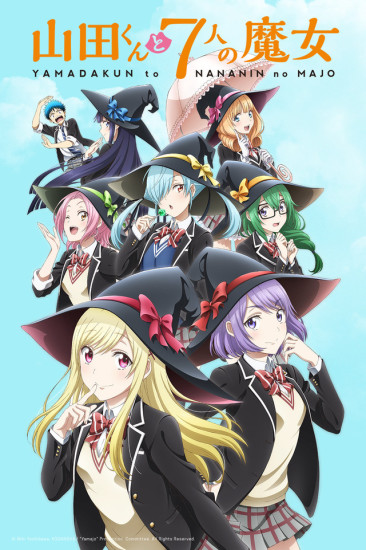 Yamada-kun and the Seven Witches Episode 2 - Kiss Me, Okay?

Ito Miyabi, who loves supernatural phenomena, appears just as Yamada, Urara, and Miyamura restart Supernatural Studies Club activities. Miyabi shows off her supernatural paraphernalia so proudly that Yamada and the others can't tell her the truth: that they only want to use the clubroom to kiss.

I've Turned Into Her!

Will You Accept? Or Won't You?

You Mustn't Kiss Her, Okay?

Be Sure to Change the Future

Please Go Out With Me

What Did You Do With Shiraishi?!

I Love You, Shiraishi

Anime-Planet users recommend these anime for fans of Yamada-kun and the Seven Witches. All available to watch right here, right now!

Firstly - Both of these anime series are weird school adventures of boy who meets  many girls who are too unusual for our world.  He gets to know about these girl's real personalities that were hidden by them for a long time. For this reason he totally changes their lifes. By the time the are also fall in love with main character. Secondly - It's better to know as less as you can before you watch both of this animes. Particulary about female-characters. Seriously. As less you know as more you laugh while wathing. ;-)

Honoka Takamiya is a typical teenager; he does his classwork and admires Ayaka, the school idol, who sits next to him in class. But the boy's life changes forever when one day, a piece of the school falls on top of him and he's saved by Ayaka due to... her magical powers?! For Ayaka is a witch, and deeming Honoka to be 'her princess', she is determined to...

You should give it a try.