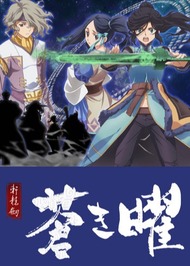 The only reason this anime doesn't have a higher rating is because the audience today is only focused on weak boring animes that are centered about slice of life , "comedy" , romance and high school life , this anime is simply amazing , it has it downsides , it didn't receive enough fundings in my opinion so , some parts of the animation seem to be CG , the sound as well , it uses some cheaply made sounds . Now about the good part , the story is mind blowing , it has action , intrigues , adventure , drama and romance , the story itself resembles to Kimetsu no Yaiba , 2 siblings trying to survive the harsh world , and also resembles Akame ga Kill , the oppressed form a rebel army to fight the ever expanding Empire . The characters also are very interesting , the bigger sister is kind and carrying and sweet , and tries her best to offer her little sister a normal life , her little sister is also kind but a bit jealous of the bigger sister because she's doing everything .  All I got to say , this anime is worth watching , very interesting , intriguing , full of action and has a solid backstory to it , it might feel a bit rushed , but my only guess it's because the lack of fundings , it doesn't have a high rating because it is not your usual Japanese anime , where the MC is a random guy who gets 10 girls falling crazy in love with him and then the story evolves about their love life , no , it is an intriguing action/fantasy/drama anime . 10/10

This is set in a steampunk world with magic. The setting looks & feels like ancient China. It has the intrigue of game of thrones, only not as many factions trying to get control. The main characters are rich & complex. I find myself invested in them enough to want to know what happens to them. It has sound effects to match the movements of the war machines, something I have not come across in anime before. This makes them more realistic. The war machines & backgrounds are highly detailed. I usually don't like anime based off a video game but I find myself  really enjoying this. The characters are very well developed, the story is very interesting, the setting is great. I like everything about this.

Ken En Ken: Aoki Kagayaki Surely you've seen some anime and just thought "Wow, this is bad! Possibly even the worst anime there is-" No. But this one could be in the top 15 worst anime series of all time by any possible measure. To describe the anime briefly: "Random Bullshit Go". We have Avatar the Lord of Elements + some low-budget magic building with no lore, monsters with magic powers that dissolve into fairy dust as soon as they lose enough HP, war with some robot dolls (that later shoot lasers around), people in flying super armor with the most epic name ever "Dark Flames". Sailor Moon Weapon Summons. Medieval Gundam and yandere simulator all in one. The pacing is slow. The scene changes are disastrous (especially in the first 2 episodes), you almost get the feeling the episodes were cut. Characters are contentless and tedious. The story is one-dimensional, monotonous, and boring. The ending is bad. Realization is bad. And to top it off, this anime had some of the worst dialogue I've ever seen. They could almost come from the imagination of a 14-year-old trying to get into an RPG. [Story 1] Whoever wrote this possessed 2 good approaches. First, he tried to place the protagonists on two opposing sides. And second, he tried to use war as a tool for different perspectives and hypocritical actions of the characters. But the implementation of these ideas almost made me cry. It could have gone in the right direction. [Characters 2] "I hate you because you love me."Is, by the way, a quote from the anime. Because the hallway is made out of hallway, the author had no choice but to improvise from this. One-dimensional and empty. Villains are villains without any depth. All other side characters are NPCs. The 3 protagonists have almost no real dialogue. And all their character problems were so unrealistic and exaggerated, that no limits were set. [Animation 2 / Music 5] Poor CGI, only freeze-frame fights, hardly any detail (except in the throne room). And the frames were almost eye-popping. That you can make a jump attack out of 3 frames and sell this as animation is new to me. Music was average, at least intro and osts. [Conclusion 2] I give at least one point for the fact that the ideas were there and some scenes may have been almost sub-par. But all in all, this is one of the worst anime I've seen so far. I can't recommend it to anyone and hope that no one else ever watches it either. [Enjoyment 0]