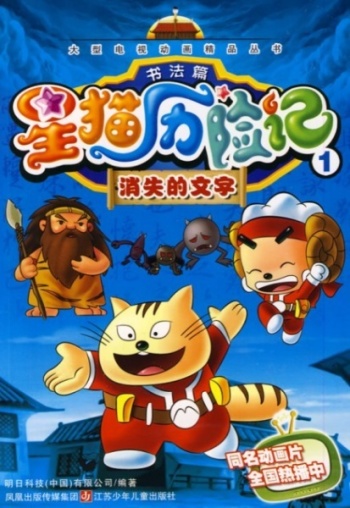 If you're looking for anime similar to Xing Mao Lixian Ji Zhi Shufa Pian, you might like these titles.

Vladimir and Hector, two secret agents opposite in every way, are trying to recover a top secret material stolen by unknown intruders.

Komaneko is the cutest little kitty a preschooler could ever meet. And she's sooo curious to explore her world! With her movie camera in hand, Komaneko and her friends explore and understand their world by making movies about the people and things they encounter in their adventures.

Shimajirou to Niji no Oasis

80 Days Around the World With Willy Fog

Detail-oriented, meticulous Willy Fog lives in London and is in the process of hiring a new butler. While at the pub that day, Willy finds himself faced with a fascinating question: how many days would it take to travel the world? While his comrades believe it would take three months, Willy wagers he can do it in only eighty days - a wager that his peers meet with a 20,000 pound reward if he is able to pull it off. Willy and his new butler set forth that very evening to complete their quest - but challenges await! A devious wolf has been hired to stop Willy from achieving his goal, and two nosy inspectors are on Willy's trail, certain that he was responsible for a bank robbery...

Puss in Boots Travels Around the World in 80 Days

In the town of Dondon a highly influential man Gourmont is willing to wager all his fortune on a bet with puss-in-boots Pero. Pero claims to be able to travel around the world in 80 days while Gourmont sees it as impossible feat to accomplish. The condition to win the bet is for Pero to stand at the top of the clock tower the moment it strikes 12 at noon 80 days after the start of his journey. It is not going to be easy however, as Gourmont doesn't wish to lose his fortune without a fight.