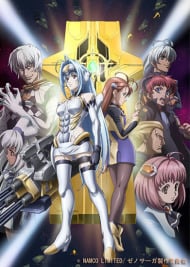 The year is T.C. 4767. Four thousand years have passed since humanity abandoned its birthplace, the planet Earth. Beset by the hostile alien Gnosis, mankind is now scrambling to find ways to defeat this threat to their existence. The development of KOS-MOS (a specialized android with amazing capabilities) by Vector engineer Shion Uzuki was one response to the threat, But when their ship is destroyed by the Gnosis, Shion and her companions find themselves thrust into the middle of a battle with no clear sides... 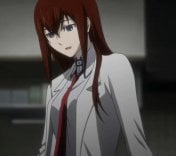 Story - 4/10 Alright, this wasn't bad. Was definitely not great, but not bad. The developement from start, to evolution of the mission, to the climax was actually done pretty well. One of the problems with this being the fact that whenever someone showed up to save them, or to destroy them, they always appear out of nowhere, and everyone is always suprised. Frankly it came to the point I was wondering who would warp in during each episode. Spoiler warning! It starts out with the main character abord a ship in a fleet, working to finish a prototype weapon that went berserk once before with her assistant, when a large group of Gnosis attack. Standard tragedy hijinks ensue, and bang-poof, prototype weapon (which is actually a hot female!) saves her while the fleet is destroyed. Picked up by a transport vessel trying to scavage for valuable pieces from the newly-created graveyard of ships, the main character and prototype weapon with assistant in tow go off on a journey to their company's headquarters. Which due to the pursuit of an at-the-time unknown enemy, ends up elsewhere, various discoveries are made, and finally after multiple battles and disjointed realizations, a final battle occurs to save a planet with a madman for the final boss. A sacrifice is made, planet saved, cue mysterious "to be continued" scene without the actual to-be-continued part. That being said, the largest problem lies with the fact there are many holes left in the plot i.e. the Zohar, and the fakes, like their function, why they were wanted, the reason Realians were made originally, and so forth. Huge gaps left in the explanation of things that just make you draw a blank.Too many topics and not enough background ruined what could have been something great. Animation - 7/10 This actually struck me as great for it's time, and suprised me with some fluid action scenes and movement. The reason I don't rate this any higher is the fact that there are plenty of still-shots and static movement scenes. Personal opinion being they could have taken a bit of the effort from the few and spread it more, and it would have been a hell of a lot better, but that notwithstanding, it did suprise me and was, overall, pleasant. Sound - 5/10 I'm fairly well split between this, hence the scoring. The Opening and Ending themes weren't particularly amazing, but the voice acting was startlingly good. There isn't much insofar as background music during the anime, but this is, in my opinion, countered by the fact that there were multiple scenes where I was drawn in by the voice acting and the emotion put into it. So while I'd rate the soundtrack a 1 or 2 out of 10, the voice acting rates at least a solid 8. Characters - 5/10 This is another I'm split on. So I'll just go about it from a character to character basis. Shion - While this is seemingly the main character, they did a damn fine job of making you say "...What the hell is this chick thinking?". This is a bad hallmark, in that being able to empathize with the main character is what you're aiming to do, to get people to enjoy it more. Instead I found that she irritated me more than anything. She came across as whiney and emotionally damaged at times, then she becomes demanding and critical near the end, with little to go on as the transition. Kos-mos - Another character that came across as irritating. I suppose it was their aim to leave you guessing as to whether she had emotions or not, but since Realians exist with them, why the heck doesn't she? Aside from those personal issues I had with her, she's a solid character whom you can easily see what will happen when she acts. Aside from the fact she can seemingly continually pull weapons out of nowhere. Allen - A kind of standard for a good many anime's. He's the subordinate of Shion, constantly being supportive and following her around like a love-sick puppy, as well as being a kind of scaredy cat. This is as much insight into this character I can give, despite seeing him in every episode with plenty of screen-time. Another of my issues with this anime being the lack of background provided. Momo - The original Prototype for the 100 series Realians. Seemingly has information inbedded into her memory by her creator Joachim Mizrahi. She is kind to everyone, and tries to help them to the point of recklessness. Has issues with the fact people see her father as a mass-murderer. Again, while this character is seen in most of the series, that's about as much information as you're going to get. Junior - While having many different names, this is the most common. One of three survivors of a mass-produced group of kids created to combat U-DO, the being which appeared on Miltia. Scared from having left his companions behind to save his own life, he (and no, it's not explained how) "halted his own time", leaving him with the appearance he had 14 years before. All in all, while the character's are nicely varied, there's multiple issues that aren't explained with them, and that are never resolved. Overall - 5/10 While this anime is good at the surface, it's entirely lacking in any kind of depth. Good for a watch if you've nothing else to see, but in my honest opinion, this one is lackluster, and could have been a lot better with more effort.

Set 4000 years in the future, humanity is facing the prospect of annihilation at the hands of the Gnosis, beings who can phase in and out of normal space. Artificial humans known as "Realians" and combat androids are created to counter this threat. On behalf of Vector Industries, scientist Shion Uzuki creates KOS-MOS, the most powerful android capable of wielding a massive arsenal. A very entertaining series overall. 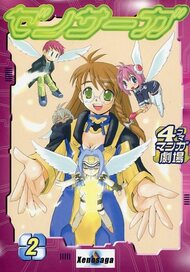 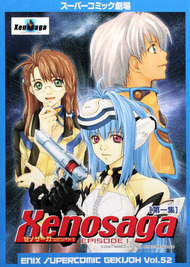 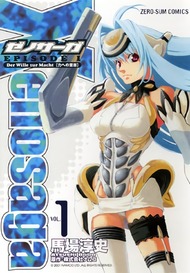