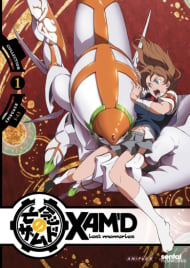 Akiyuki lives on post-war Sentan Island, always rushing between the demands of his separated parents and his friends at school. But his carefree days come abruptly to an end when his school bus suffers an explosion, the first attack to plunge Sentan back into war. Akiyuki lives to find himself turned into a Xam'd, a mysterious creature, by the suspected cause of the explosion. Engulfed by Xam'd, Akiyuki is eventually saved by a red-haired girl, Nakiami, only to find himself torn away from those he loves. Now he must work to control and understand the creature within him, all while searching for his family and friends in a world steeped in the secrets and chaos of war.

If you've heard of this show you've likely seen all the familiar predecessors, and the bottom line is there isn't really anything new or original here.  It starts off as a very unique and compelling show (with all the usual tropes and cliches) but slowly devolves into just another generic anime shortly after half-way.  By the end you'll be scratching your head over what you just saw when you realize the show has literally come full circle and not really answered much of anything. If you're new to anime or just looking for an above average show to pass the time, it's worth a watch.  If you're looking for something unique or action-packed (don't be confused by the first couple episodes), give this show a pass.

Plot: The plotline of Xam'd, although pretty original and not very predictable, is not the strong point. I had no problems with the plot and really liked it, except for the fact that a clear explanation of why a war was being waged between the North and the South was never explained. Sometimes the episodes meanderd a bit during the first third of the series. Also, for those people who don't like slice of life type of stories might find the beginning a bit slow. However, since I do enjoy slice of life, I had no problems.However in the last part, the director knows exactly what he wants to do. It isn't rushed like most endings now a days are, and it leaves a satisfying feeling when it ends.Another thing that I really liked about Xam'd, was that there antagonists weren't some brainless screaming villains that had no real motives behind their actions, and they weren't the type of villains who were 'only doing evil because of their horrible past'. For example even though I hated the commander, I found myself pitying/sympathizing him in the end.I can't be more specific than this, because I don't want to give the plot away.Animation:The animation was fantastic. Especially the battle scenes. One movement just flowed into the next, and in my opinion looked kind of graceful. Also, the sceneries that were drawn each had their own feel in them that helped establish the mood, and each place evoked different emotions in you, and to some extent the characters as well. It was just flawless, it really brings animation to a whole different level.Sound:Michiru Oshima has done it again. For those who don't know who Michiru Oshima is, she composed the music for Full Metal Alchemist.I love the soundtrack, to the point where I actually have it on my iPod and frequently listen to it. It establishes the right mood for all the sceneries and has just the sound that Xam'd requires. If any other person composed the music, I'm almost positively sure that it wouldn't have the same impact and effect on the series.Characters:The character designed slightly resembled Miyazaki's style of art. Also, Nakiami's character reminded me a bit of Nausicaa.The characters in this show is what truly makes this anime a master piece. Each character is well developed and unique. The characters mature over time, and the relationships they establish with one another are strong and believable. The way they interact with one another provides entertaining results at times, due to their unique personalities.Looking back, even Nakiami, who rarely exhibits emotions in the beginning of the series, and is kind of quiet, has her own feel that doesn't resemble anything like the traditional quiet apathetic girl you get in most animes.Overall:Overall, this series was amazing. This is probably my favorite anime right now, and I  have gone back to it several times, because it is a sheer pleasure to watch. 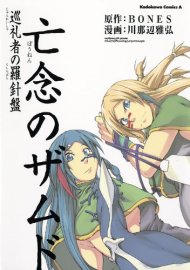