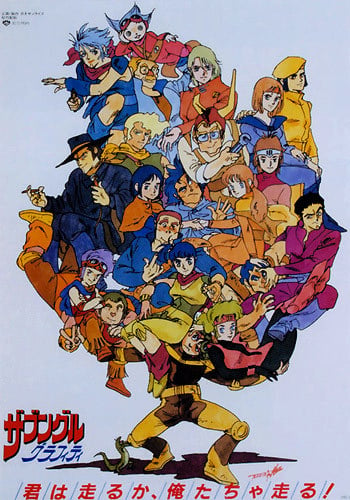 UFO Robot Grendizer is the third entry in the Mazinger Trilogy by Go Nagai, following Mazinger Z and Great Mazinger. This particular incarnation was illustrated by Gosaku Ota and published in Boken Oh, Otomodachi from October 1975 – March 1977. It follows the adventures of Duke Fleed, the sole survivor of an attack on the Vegan Empire, who defends his second home, the Earth, from the Vegan attack, together with the giant robot Grendizer.

Tsubaki Sadamitsu is a young punk and Leader of the Corpse Gang who, after a chance encounter with an alien robot, is forced to take up the task of capturing rukeitai (intergalactic criminals). His job is made harder with the appearance of the Vulture, a last ditch effort to keep the rukeitai under control.