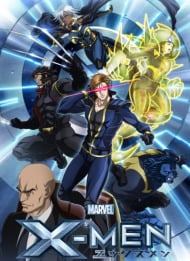 A year has passed since Jean Grey met her tragic demise, and the X-Men and Xavier Institute have yet to recover. Things change when Charles Xavier calls the disbanded mutant team back together, sending them to Japan to help find a missing girl named Hisako. But when they arrive abroad the team discovers that things are far worse than they expected: a shadowy group is abducting mutants, bringing them to secret laboratories, and an insidious, potentially fatal secondary mutation called the Damon-Hall Syndrome is spreading. Together, the X-Men must discover the truth behind these events and put a stop to the violence against mutants.

As a huge X-Men fan, I was looking forward to this series. However, unlike some super-fans, it did not need to be similar to the existing media to be considered any good to me. However, not only did it miss the tone of the comics, but it really wasn't good. It was bland and the plot jumped too much; I was even confused at one point. My first complaint is the characters. They have a large cast of original characters with cool powers, but they don't use them. Scott and Emma are the main focus, while the others are secondary to them. I'm glad they didn't go overboard and introduce 20 mutants, but they could have made the characters they chose to use less 'two-dimentional'. Their personality could have been shown more, and their powers could have been used in more interesting ways. (Also, if you're looking at the opening/closing it includes many mutants that are not even in the show). Which leads me to my next complaint. There are very few action scenes in the show. The coolest thing about mutants is their powers, but there are only a few action scenes. Instead, they will entire episodes with the chaaracters just standing around and talking, which is the show's biggest downfall. All the dialogue is long, dull, and neverending conversations. There are a few fun one-liners, but that's about it. The slow pace of the show makes it almost unbearable to watch. The plot was also a bit confusing and all over the place. It jumped from plot point to plot point (U-Men, Hisako, disease) and although they all tied in together in the end, the rest of the show was just too confusing. It had no clear direction for most of the series and it felt confusing to watch. I was worried I missed a scene or two somehow. They had so much X-Men history to work with, they should have stuck to a popular story instead of the American-Japanese hybrid they used. It felt like both an anime and cartoon mixed together in the wrong ways. Overall, I still did find some enjoyment seeing some characters from one of my favorite franchises together again, however the vast history and interesting characters were underused. The show could have used more focus in both tone and plot to fix many of the issues I had. Extra: A few fan-complaints:-Cyclops kept posing all the time. Very annoying. He also was a blast-first, ask questions later kind of guy, which isn't what he is like in the comics.-Emma Frost was weak, had HUGE boobs, her second form is never referred to as 'diamond', her telepahy (which could have solved so many problems) was rarely used, and she wasn't the loveable cocky bitch from the comics.-Beast, Storm, and Armor had the only character designs I liked. Even Xavier, a simple character to draw, look far too serious and didn't have that fatherly smile he is known for.-No good mutant villians. If they had stuff with a character like Magneto instead of trying to make such a confusing plot, it might have been more enjoyable.-The voices didn't match the characters. But this is probably because I'm not used to hearing American characters speaking Japanese. I saw part of an episode in English, and it sounded much better.-This version of Wolverine is better than the one from the Wolverine anime, but still not perfect.-The show didn't have a X-Men feel to it.  Overall enjoyment: 4