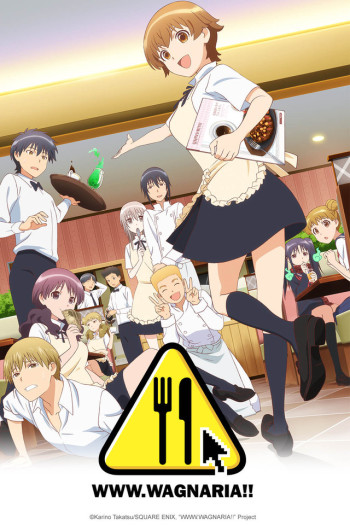 You do not need to have watched the first 3 seasons of Working in order to watch www.Working

www.Working is a separate experience than Working with a whole new cast but it does borrow many of the comedic and plot driven devices that made the first one so good. This new season tries to cram in what the original series did in three seasons and honestly it might have been for the better.

The last sentence I put in my opening statement has to do with how this new season deals with the character relationships. In the original Working visible relationships were starting to form within the cast in the first season. These relationships however take three seasons to full get realized. In www.Working however it takes only thirteen episodes to see three couples come to terms with each other. I find that the grand beauty of this new season is that everything moves at a very understandable pace with character building and at-work semantics happening together. This was the case for the first season of the original series but seasons two and three had issues presenting worthy character/relationship building.

This new season absolutely nails pacing and provides so many awesome scenes between characters. Idk what the outlook is for future seasons (seeing how this one ended) but I did wish we got a couple more episodes to see things flesh out a little more.

Honestly nothing to write home about. The animation gets the job done. The artstyle is in-line with what has been present in previous Working seasons which is a good thing. Character models are very pleasing to look at and the background scenes are very well done. It is a pleasant show to look at.

Totally dug each character's VA. They feel so real on screen which means the voice actors nailed it 100%. Also the background music fits in very well. It is recycled a little more than I wanted to but the themes help make the scenes great.

This might come off as a little blasphemous but this cast is much better than the original Working cast. This new cast has just the right balance of weird and super cute/likable characteristics. I'm looking through the character list right now and I seriously cannot find a single one that I even remotely disliked. Higashida and Miyakoshi's chemistry was 100% spot on from episode one, Shiho's transformation was so rewarding to see progress, and Sayuri's and Adachi's growing chemistry was probably the thing I enjoyed most about the show. No matter which group was on screen, it was always amazing. Even the things that didn't play out as much as I wanted (like Saiki's growing understanding of the Japanese Language and his boss/worker relationship with Kondo) was still really fun to watch when it was present.

When a show never lets me lose my smile it did characters 100% right.

This is simply a fantastic show. Regardless if you have seen the original Working you should go watch this now. It nails the comedy, the character building, and the work atmosphere antics. Probably my most favorite show of this year now no joke.

*Just like the original series also WWW.Working!! was a very fun and relaxing series. Its straightforward humor, simple animation and not very complicated characters made that you don't really have to think whilst watching this series. And that's a good thing from time to time, to be able to just sit down, watch an anime and just enjoy it without too much commotion. So in that concept, this new series resembled the old series a lot. It was a constant flow of skits and gags.

Inami went from a completely shy and man-hating girl to a social someone who started to understand what loving means. With Miyakoshi I didn’t have that feeling, she didn’t go through that development and stayed pretty much the same throughout the anime. Also the other characters were less interesting, their stories were less interesting. In the original series I created a bond with the characters whilst here I did not.

*And another thing was that I felt that some of the storylines were rushed and incomplete. For me the best example was Nagata. The anime could have done so much more with her being the love rival for Miyakoshi. But the anime didn’t do anything with her. Another storyline that did some twisted things was the one of Shiho and Yuuta. Here I felt that rushness towards the end of the story where Shiho changed personality really fast. The stories that were told in this anime were too numerous and too complex to be told in a rush. They could have easily been main storylines in their own anime.

So as a conclusion, WWW.Working!! was a good addition to the Working franchise but in my opinion it wasn't as good as the original. The 3 seasons of Working amused me more, the comedy was more my thing and the romance was way stronger and one of the best things of those 3 seasons. So this new season was ok but not amazing so overall I'm going to rate WWW.Working!! at 3 stars. The fans of the series can give this a try but don't expect it to be the same as the original series. And to those that haven't watched this franchise yet, I advice to watch the 3 original seasons, you'll get more bang for your buck.

The strangest thing about A-1 Pictures’ 2016 restaurant-slice-of-life is that it was known in Japan by its English language title “www.Working!!”. There was an original three season anime by the same name that showed in 2010, 2011 and 2015. (“Wagnaria” is a fictional family restaurant chain with the 2016 show set in a different restaurant, with different characters, from that in the original three seasons.) The idea for the show is fairly conventional but that is no indicator for just how unconventional this is. The clincher here is the batshit crazy characters who work in the restaurant. Providing a synopsis for the story is a bit of a struggle because it is so eccentric and weird that it eludes all attempts to summarise it. It is not that the story is as impenetrable as, say, “Owarimonogatari” (Shaft 2017) – it is humanly possible to understand the story - but it does require a certain amount of concentration on behalf of the viewer. The issue here is that the interaction between the characters is so off-the-wall that nothing runs quite in the manner as more-cliched anime shows. You might find this frustrating as watching the show can be a little demanding.

The story revolves around the potential/actual romantic relationships between three couples who work in the chain. The first is between High School students Daisuke Higashida and Hana Miyakoshi. Much of the story spins around the fact that Miyakoshi makes Valentine’s chocolate so toxic that it invokes a near-death hallucination in whoever eats it. Strangely Higashida seems drawn to eat the chocolate which leads to all kinds of bizarre out-of-body experiences from which they conclude that they should date in order to improve her cooking abilities. The next couple are Sayuri Manush and Masahiro Adachi. Un-smiling Muranushi has supernatural abilities and can see the dead but strangely she doesn’t believe in ghosts. Adachi is freaked out by her, but still falls in love with her, when she actually smiles at him. The final couple is Shiho Kamakura and Yuta Shindo: he is very poor because his family are in debt to her family. She takes sadistic pleasure in making his life a misery because he spurned her advances several years before. The restaurant has several other employees and regular all of whom are equally as colourful and bizarre as these six. The story is densely packed with the highly eccentric interactions between the employees and a small number of regular customers. It is a show you will watch to enjoy for the bunch of weirdos that populate it. You will never have seen such strange romances as the three or four then run through this show. Oh yes, and there is a racoon and a baby too. The show defies categorisation, reduction of simplification and is highly original in that sense. You find yourself glued to it through the endless fascination with these oddballs and how they manage to muddle through to a satisfactory conclusion at the end. Some may find the show quite irritating for the same reasons. It rather depends on how relatable and sympathetic you feel towards this bunch of dingbats.

Once you get past the disappointment that none of the cast of the three-season Working!! phenom appear in this short 13-episode run of www.Working!! which appeared one year after the original series concluded (2016), you have new love affairs to laugh at.  Well, I would hold that Hana Miyakoshi resembles Mahiru Inami sans the 'mosquito bites' reference.  But the secret of giving www.Working!! a fair chance is to put all those cute people of the 2010-2015 anime behind you and try to find the kawaii in the new cast.

The only thing that one can find familiar is the setting, another one of those Wagnaria Family Restaurants and the miracle of franchise duplication.  That and the theme of girl meets guy and despite all odds, love blooms.  Maybe a little withering of the bud before the blossom, but perseverance helps.

Three romances are there for your entertainment.  First, Daisuke Higashida and Hana Miyakoshi, or the poisoner and her victim.  Honestly, Hana tries to improve her cooking skills, but her chocolates have sent Daisuke into several near-death experiences where he gets timely (or, out-of-timely) advise on love and relationships from St. Valentine.  The amiable bishop steers both Daisuke and Hana to better understand that the stomach is not necessarily the best path to the heart.

Then Sayuri Muranushi and Masahiro Adachi, the would-be exorcist with the mysterious charming smile and the poor sap who falls for girl, grin and all.  Sayuri does double duty as contact person with two girls with prospects of building a love triangle, one interested in Daisuke, the other trying to understand Sayuri's faltering efforts to land Adachi.

Finally, the love story that would light up Wall Street, Shiho Kamakura and Yuta Shindo.  She the creditor, he the debtor.  Shiho uses this advantage over Yuta for simple sadistic pleasure.  But then we learn two things.  First, the actual debt was raised by Yuta's irresponsible father.  Second, Shiho once confessed her love for Yuta several years back.  But the Kamakura financial group puts the pressure on the deadbeat dad at the same time Yuta regrets his refusal of Shiho.  Still, one wonders how much influence money would have on cases like this.

The animation style is that of Working!! with no real innovations.  The music has always been a highpoint with the Working!! projects, though the two themes of www.Working!! does not have that same appeal.  It's like trying to work the formula one time too many.  You're happy that all these romances get some level of resolution.  You're probably happier there wasn't a second season.