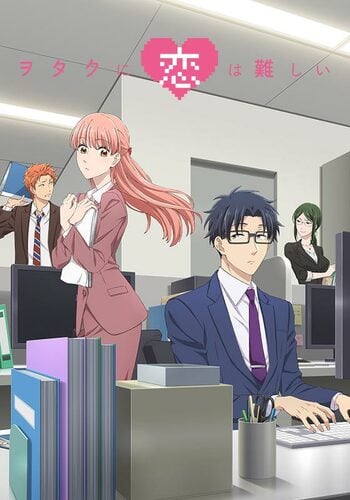 If you're looking for manga similar to Wotakoi: Love is Hard for Otaku, you might like these titles.

Although Ilene Jung is a popular webtoon artist, she needs another job. A crappy desk job to be exact, one tyrannically controlled by the meanest manager in the world: Jim Kang. He insults her work, refuses to teach her, and even makes her miss an important appointment by forcing her work late on her very first day. To make things worse, when Jim applies to become an artist’s assistant, the artist turns out to be Ilene! In a begrudging twist of fate, she accepts him and the two enter a bizarre working relationship both at home and at the office. How long can it last? Why is Ilene working a desk job? And who’s the boss here anyways?!

both are placed in an office environment, have an otaku mc and offer good comedy and romance. yes, my boss has a different twist to it, but i'm sure if you like one you'll like the other as well ! <3

Yae's living her dream, working at the toiletry maker Lilia Drop. Little do her coworkers know, the reason she loves the company so much is that she's ashamed of her body odor, and their soap is the only thing that does the trick. So when the company's lead product developer, a perfuming genius, approaches her in the lobby and wonders what "that smell" is, she's terrified... but could it be... that he likes it? And, even more surprising to Yae... does she like him?

both of thdrd have such simular vibes. i love them both so much.

the only real difference is one is more sex diver and lude then the other ;3

The Guy I'm into Is a You-Know-What!

"No problem. A man always keeps his word. We can do it as many times as you want." Sakiko Kotohira is a devoted yaoi fangirl and absolutely head over heels for Reiji, the cool, dominant protagonist of her favorite comic. One of the highlights of Sakiko's day is catching a glimpse of Masayuki Utazu, a coworker who happens to look just like Reiji. One day, distracted by her daydreams, Sakiko suddenly finds herself face-to-face with the office lookalike. He turns out to be even hotter than she'd imagined. Desperate for material to fuel future fantasies, Sakiko all but rips her clothes off and pounces on the guy. Masayuki's cool, imperial resolve melts away in a second. Further prompted by a secret reason of his own, Masayuki decides he has to have her!!

Kitaoji, an elite salaryman, yearns for a shoujo manga-like love. But he’s paired up with Arima, a guy he doesn’t get along with. Will Kitaoji’s earnest wish come true one day…?