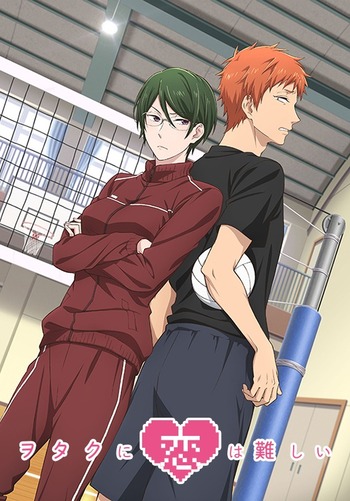 If you're looking for manga similar to Wotakoi: Love is Hard for Otaku - Youth, you might like these titles.

Mizuki loves beach volleyball, and luckily she finds herself forming a team with the best player of the region, Ozonin. But that seems to attract the wrath of Ozonin's old teammate, who swears to get revenge.

A pretty-boy volleyball player named Akira gets kicked out of his middle school team for being too arrogant. With his coach refusing to give him a reference, it looks like he will only be able to go to a high school with a mediocre volleyball team. By chance, he finds a leaflet for Seiryoh High School volleyball team and decided to try out. But then complications arise in the form of a delinquent with very curly hair.

28-year-old Japanese national representative for volleyball, Nohara Suzuki, and Judo, Takaya Yano, are facing the same problem: they both just got dumped because they were too inexperienced in the world of physical relationships. So what do two over-achieving athletes decide to do? Practice, of course! And as Nohara and Takaya practice more and more, they may just find the ones they're practicing for...are each other.